Harsimrat Kaur Badal called decision miracle and said that prayers of crores of people had been answered with the opening of the corridor. 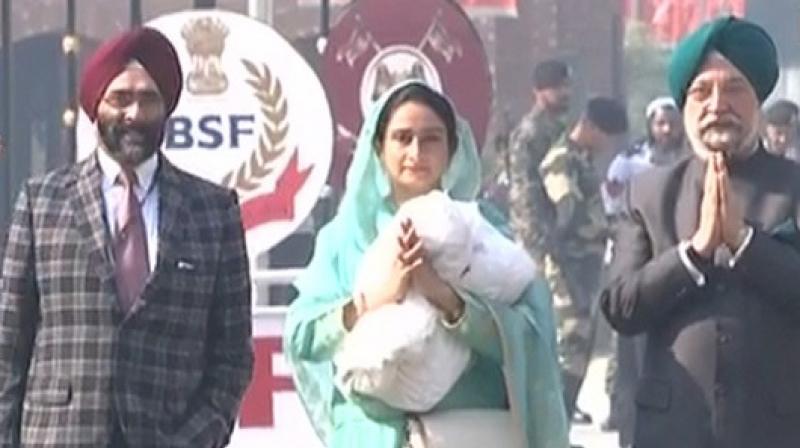 Wagah Border/ Amritsar: Minister for Food Processing Industries Harsimrat Kaur Badal and Minister of State for Housing and Urban Affairs Hardeep Singh Puri have crossed the Wagah Border to attend the groundbreaking ceremony of the Kartarpur corridor in Pakistan on Wednesday as India's representatives for the event.

"I feel greatly privileged and blessed to be able to make this pilgrimage. This has been a long-standing demand of the Sikh community. This is a demand, I am aware, exists since 1994. In fact when former Prime Minister Atal Bihari Vajpayee went to Lahore, at that point of time the issue had been raised from our side. I am grateful to the Government of India for announcing a string of measures on November 22," Puri said before crossing the border.

Refuting Pakistan's claims of having forced its decision on India regarding the Kartarpur corridor, Puri highlighted India's November 22 Cabinet meeting saying the decision was taken well before on a number of matters related to the 550th birth celebrations of Guru Nanak.

"This means we were doing our preparations for months," Puri said while mentioning that the corridor between Dera Baba Nanak and Kartarpur is a "significant" measure taken by the Indian government.

"I would like to place on record my gratitude and appreciation towards the Pakistan government as a Sikh that this long-standing demand of the community has been met. Now we need to take this process forward. This decision is anchored in hope and goodwill, but we have to be acutely conscious of the ground realities. Due to a number of factors, there is distrust we have felt for very long and we have been at the receiving end of actions from a state which should not have allowed certain forces on their territory," Puri mentioned to reporters at the Wagah border.

The Minister of State further said, "We need to operationalise the decision and make the corridor operative. To take the process further will require actions by all the stakeholders. Let us take these things one step at a time, I don't want to jump the gun. If Guru Nanak's teachings can be invoked in order to solve our problems, it would be a very proud day for me as a Sikh."

Meanwhile, Harsimrat Kaur Badal called the decision a miracle and said that the prayers of crores of people had been answered with the opening of the corridor.

External Affairs Minister Sushma Swaraj had chosen Badal and Puri to represent India at the event. The EAM declined Pakistan's invitation to attend the event due to prior election commitments in Telangana.

Meanwhile, Punjab cabinet minister and former cricketer Navjot Singh Sidhu, who arrived in Pakistan on Tuesday for the groundbreaking ceremony, opined that the event marks "the first steps towards a people's foreign policy."

The Kartarpur route along the India-Pakistan border is three kilometers away from Gurdaspur, Punjab. Once opened, it would allow Sikh pilgrims a direct access to the historic Gurdwara Darbar Sahib in Kartarpur, Pakistan, where Guru Nanak died in 1539.