India   All India  28 Nov 2018  ‘Confident’ Shivraj stays away from constituency
India, All India

‘Confident’ Shivraj stays away from constituency

Mr Chouhan is perhaps the first chief minister in India who never campaigns in his constituency during the elections, he added. 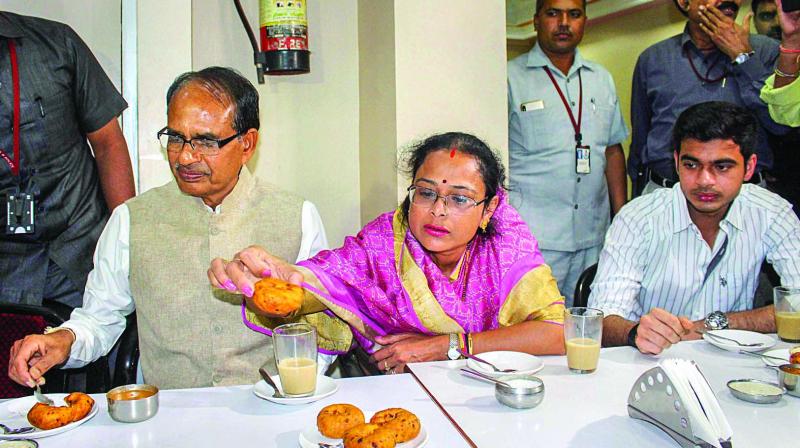 Madhya Pradesh chief minister Shivraj Singh Chouhan, along with his wife Sadhna and son Kunal, enjoys snacks during a visit to Indian Coffee House in Bhopal on Tuesday. (Photo: PTI )

Bhopal: Madhya Pradesh chief minister Shivraj Singh Chouhan, in his characteristic style, has stayed away from his home turf Budhni, assigning the task of campaigning in the Assembly constituency to the local workers and his family.

The last time he had visited his constituency was on November 5 when he addressed party workers asking them to take over charge of electioneering in the seat after filing his nomination papers.

“I am not going to campaign in Budhni. It is your responsibility to ensure my victory in the seat,” he had exhorted the party workers. He has stayed away Budhni since then.

He was seeking elections from Budhni for third time in the November 28 elections.

“The chief minister has made it a policy not to campaign in his home constituency during the elections. He has never made a departure to the practice. He visits his constituency to file nomination papers and returns to Budhni after poll results are declared”, BJP spokesperson Rajnish Agrawal told this newspaper on Tuesday.

Mr Chouhan is perhaps the first chief minister in India who never campaigns in his constituency during the elections, he added.

In fact, the electioneering for him has been conducted in Budhni under the stewardship of Mr Chouhan’s wife Sadhna Singh and elder son Kartikeya.

Mr Chouhan was seen savouring “dosa”, the quintessential snack of India, in Indian Coffee House here along with his family members on Tuesday. “I am 100 per cent confident that BJP will retain power in the polls”, he told reporters. MP is going to elections on Wednesday.