India   All India  28 Nov 2018  At Kartarpur ceremony, Sidhu calls for restoring peace between India and Pakistan
India, All India

At Kartarpur ceremony, Sidhu calls for restoring peace between India and Pakistan

Sidhu, who attended the groundbreaking ceremony of the Kartarpur Corridor, said both govt's should realise that they have to move forward. 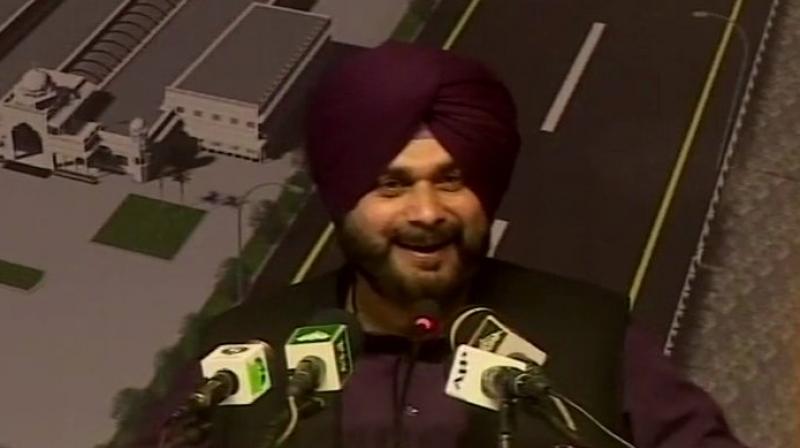 Sidhu congratulated his 'friend' Khan for the initiative and hoped that there will be love and peace between both the nations. (Photo: ANI/Twitter)

Kartarpur: Violence must be stopped and peace should be restored between India and Pakistan, Punjab cabinet minister Navjot Singh Sidhu said Wednesday as he described the Kartarpur Corridor as a major opportunity to open the hearts of the people in the two neighbouring countries.

Sidhu, who attended the groundbreaking ceremony of the Kartarpur Corridor on the Pakistani side, said both the governments should realise that they have to move forward.

Kartarpur Sahib in Pakistan is located across the river Ravi, about four kilometres from the Dera Baba Nanak shrine. It was established by the Sikh Guru in 1522.

The first gurdwara, Gurdwara Kartarpur Sahib, was built here, where Guru Nanak Dev is said to have died. The Kartarpur Corridor, which will facilitate the visa-free travel of Sikh pilgrims on both sides, is expected to be completed within six months.

Sidhu congratulated his 'friend' Khan for the initiative and hoped that there will be love and peace between both the nations. He said there had been enough bad blood and that the corridor would be a major opportunity to open the doors of the hearts of the people.

"Violence must stop and peace should return to the region," he said. Sidhu said that both the nations should seek a path of brotherhood and live in harmony without any fear with the blessing of Guru Nanak Dev.

Sidhu said that if the borders between both countries opened, it would be possible to transport goods to different parts of Pakistan and even others countries.

"This is my hope, this is my dream ... While there is blood in my veins, I will continue to thank both governments," he said. "My father used to tell me that Punjab Mail went till Lahore, I believe that it can go further till Peshawar, till Afghanistan," he said.

He said his "big-hearted" friend Khan has kept his promise and ended 70 years of wait for the corridor. "The Kartarpur Spirit can make pilgrims of us all, venturing out on a journey that breaks the barriers of history and opens the borders of the heart and the mind. A journey that our people can walk together towards, a future of shared peace and prosperity for India and Pakistan," he said ahead of the ceremony.