Opposition divided over ‘Bharat Bandh’; only a protest says Congress 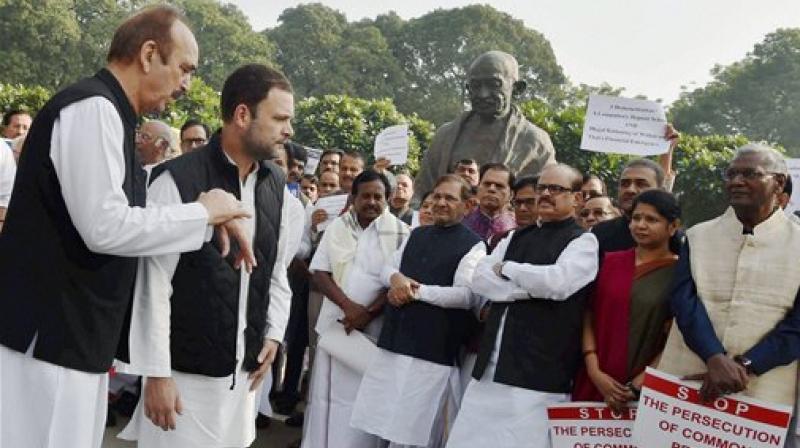 Rahul Gandhi, Ghulam Nabi Azad and other opposition members during a protest against the demonetization of Rs 500 and Rs 1000 notes at Parliament house in New Delhi on Wednesday. (Photo: PTI)

New Delhi: The demonetisation exercise by the Modi government has brought a rarely seen unity among opposition parties, but they stand divided over the way they would protest against the measure tomorrow.

While the Left parties, including the CPI(M) and CPI have called a 12-hour bandh to protest against demonetisation of old high-value currency notes in West Bengal, Mamata Banerjee's TMC will not join it and only hold protests.

The Congress too has decided not to go for a bandh.

Leader of Opposition in the Rajya Sabha, Ghulam Nabi Azad, on Monday denied that any all-India bandh call had been given by the opposition parties against demonetisation.

Criticising the Bharatiya Janata Party (BJP), he claimed that the saffron party has the maximum amount of black money.

"The maximum amount of black money is with the BJP. Before criticizing other parties, they should introspect first. As far as the Bharat Bandh is concerned, nobody has spoken about a Bharat Bandh. We have not taken any call on or for a Bharat Bandh," said Azad.

Senior party leader Jairam Ramesh said no 'Bharat Bandh' has been called by the party which will hold nation-wide protests as part of 'Jan Aakrosh Diwas'.

The JD(U) has decided not to participate in the protests by opposition parties on Monday or West Bengal Chief Minister Mamata Banerjee's proposed dharna in Patna on November 30 after its leader and Bihar Chief Minister Nitish Kumar welcomed the demonetisation decision.

"We have supported he Centre's demonetisation move. How can we oppose or be the part of activity like bandh which is meant to protest the issue which our party has strongly supported," Bihar unit JD(U) President Bashishtha Narayan Singh said.

"JD(U) will not be part of any agitation against demonetisation including the dharna by Mamata Banerjee on November 30 in Patna," party Secretary General K C Tyagi said.

"We have taken an ideological position in favour of demonetisation so how can we be part of any agitation seeking its roll back," Tyagi said.

Odisha's ruling BJP will also not join the protests with its leader and Chief Minister Naveen Patnaik having hailed the demonetisation decision.

The opposition parties have been divided over the ways to protest against demonetisation ever since Mamata Banerjee decided to march to the President against it. While she was joined by AAP, National Conference and Shiv Sena, an NDA ally, other opposition parties stayed away. Shiv Sena has backed demonetisation but is unhappy over the way it was causing problems to people.

Mamata's TMC and Delhi Chief Minister Arvind Kejriwal's AAP are the only parties which have demanded a roll back of the exercise, while other parties have voiced displeasure over the way it was being implemented which was causing hardship to common people.