There are conflicting reports about the depth of the hole- some say it is 600 feet deep, while others say it is at least 1,000 feet. 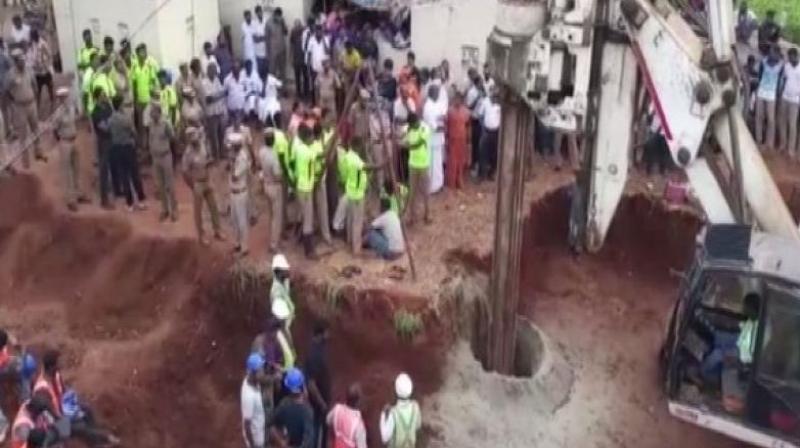 The two-year-old boy, Sujith Wilson, who is trapped in borewell in Tamil Nadu’s trichy for over 60 hours now, had fainted but was breathing, said authorities on Sunday night. (Photo: File)

Trichy: The two-year-old boy, Sujith Wilson, who is trapped in borewell in Tamil Nadu’s trichy for over 60 hours now, had fainted but was breathing, said authorities on Sunday night.

The child fell into a 25-feet borewell while he was playing near his house. Later, he slipped further down and is now stuck at 100 feet into the borewell after rescuers tried to pull him up using a rope.

The rescue team is drilling a one-meter-wide tunnel parallel to the borewell to reach him but the progress is slow due to the rocky terrain. Deputy Chief Minister O Panneerselvam visited the site and met Sujith's family.

Highlighting that due to the presence of hard rocks in the area there is a delay in the drilling process, Panneerselvam said, "However, within four or five hours, the rescue operation will reach its final stage."

"After the failure, it was planned to drill near the deep well. Following this, a rig machine was used," the Deputy Chief Minister who visited the rescue operation site said on Monday.

After the rig machine was damaged due to the presence of rocks, a high-speed engine was brought for drilling from Ramanathapuram.

The Deputy Chief Minister further said that unused deep wells throughout Tamil Nadu will be closed immediately to prevent such incidents in the future.

Tamil Nadu ministers C Vijayabaskar and ''Vellamandi'' N Nagarajan are at the spot, along with senior state officials.

As the rescuers race against time, prayers for the safety of the child have started in the state.

Congress leader Rahul Gandhi took to Twitter praying for the rescue of the trapped toddler.

While the nation celebrates Deepavali, in Tamil Nadu a race against time is underway to save baby Surjeeth, who has been trapped in a borewell since Friday. I pray that he will be rescued & reunited with his distraught parents at the earliest 🙏#savesurjeeth

The actor-turned-politician Kamal Haasan, Rajinikanth also expressed their concern over the incident.

"I pray for the rescue of the boy. Parents should take care of their children. Precautionary measures should have been taken," Rajinikanth was quoted by news agency PTI as saying.

According to the police, Sujith, who had been playing near the borewell, fell in at around 5.30 pm on Friday night. There are conflicting reports about the depth of the hole- some say it is 600 feet deep, while others say it is at least 1,000 feet.

Sujith has been in the borewell without food and water. Oxygen is being supplied but he has stopped responding to calls.