Easwar had claimed that 20 devotees opposing entry of women were ready to inflict knife injuries on themselves on temple premises. 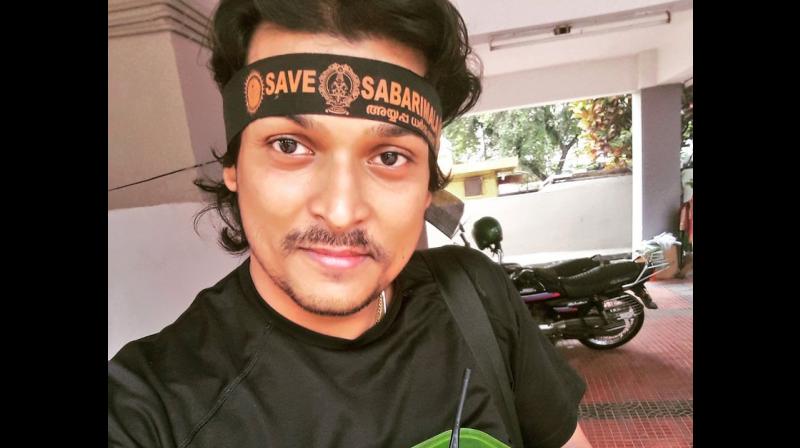 A team of police personnel from Kochi took Easwar into custody from his flat in Thiruvananthapuram in connection with case registered under IPC Sections 153 and 117, police said. (Photo: Twitter | @RahulEaswar)

Thiruvananthapuram: Police on Sunday took into custody Rahul Easwar, president of the 'Ayyappa Dharma Sena', for his alleged provocative statement related to the entry of women into the Lord Ayyappa Temple at Sabarimala.

A team of police personnel from Kochi took Easwar into custody from his flat in Thiruvananthapuram in connection with a case registered under IPC Sections 153 (wantonly giving provocation with intent to cause riot) and 117 (abetting commission of offence by the public or by more than 10 persons), police said.

The arrest will be recorded in the evening after they reach Kochi, police sources said.

A member of the Thazhamon family of Sabarimala tantris (head priests), Easwar had said during a press meet in Kochi last week that they had a contingency plan to force the closure of the temple by spilling blood on its premises by some devotees in case any woman in the 'barred' age group managed to reach it.

He had also claimed that 20 Lord Ayyappa devotees opposing the entry of women in the age group of 10 and 50 were ready to inflict knife injuries on themselves on the temple premises, which would have forced the priests to close the gates on account of impurity.

"Had their blood fallen on the floor of the temple, that would have forced the priests to shut the shrine for three days for purification rituals," Easwar had said.

A case was registered against him later on the basis of a complaint filed by a Thiruvananthapuram native.

Kerala Devaswom Minister Kadakkampally Surendran had claimed that effective police intervention had foiled the protesters' bid to "desecrate" the Ayyappa Temple by spilling blood in the premises if women devotees in the 10-50 age group offered prayers. He had said the "conspiracy" of the devotees was made clear by the statement of Rahul Easwar.

The minister had also said the disclosure showed that there was a well-conceived plan, similar to that followed by nations to attack their enemies and added that this attempt was not only 'seditious,' but also against the interests of devotees.

Easwar was earlier arrested from Sabarimala Sannidhanam (temple complex) on October 17 over the 'save Sabarimala campaign, and later released on bail.

The temple had witnessed high drama with around a dozen women in 10-50 age group being prevented from entering the temple by protesting devotees after the doors were opened for all women, following the Supreme Court verdict.

On September 28, a five-judge Constitution bench of the apex court, headed by then Chief Justice Dipak Misra, had lifted the centuries-old ban on the entry of women of menstrual age into the shrine.

BJP state president P S Sreedharan Pillai Sunday lashed out at the police action against Easwar. "BJP condemns the police action on Rahul Easwar and also those associated wit the protests over the Sabarimala issue," he told reporters.