J&K cop who failed to return to duty, may have joined LeT: police

A picture of Ishfaq Ahmed Dar showed him holding an AK-47 assault rifle has gone viral on social media. 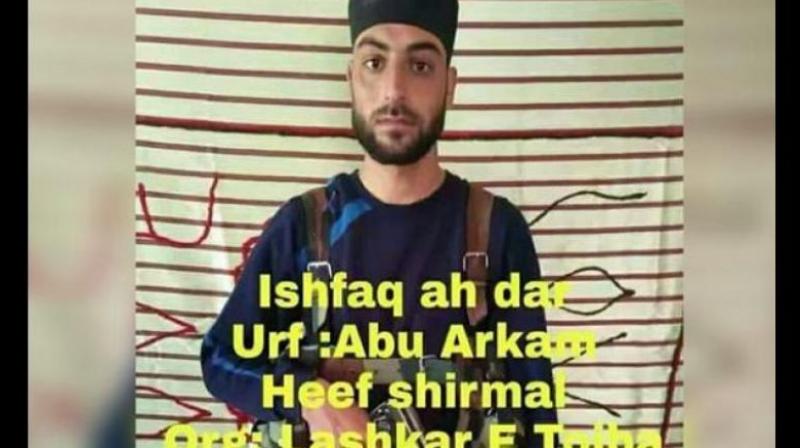 A purported picture of a Jammu and Kashmir policeman with an AK-47 assault rifle is doing the rounds of social media fuelling rumours that he has joined the Lashkar-e-Taiba (LeT) as he did not report for duty following a leave. (Screengrab)

Srinagar: A Jammu and Kashmir policeman, who went missing earlier this week is reported to have joined Lashkar-e-Taiba (LeT) militant outfit.

A picture of Ishfaq Ahmed Dar, who was posted at the Police Training Centre (PTC) in Kathua district of the State showing him holding an AK-47 assault rifle has gone viral on social media.

Dar who was on leave, failed to return to his duty.

“He was supposed to report back to duty on October 23 but he failed and the preliminary investigations have confirmed he has joined the LeT terror outfit,” said a police officer who spoke to this newspaper on condition of anonymity.

“We will take legal action against him,” Kathua said, an official of the PTC.

Dar, a resident of Heff Shirmal village of southern Shopian district, a hotbed of militancy, had joined the police in 2012, the officials said.

The police sources said that in the last two years as many as eight policemen have deserted the police and joined the militants’ ranks in Jammu and Kashmir.

In May this year, a police constable Syed Naveed Mushtaq fled with four INSAS service rifles including one of his own from a FCI store in central district of Budgam, where he was deployed as part of a posse of cops on guard duty. Later it was learnt that he has joined Hizb-ul-Mujahedeen militant outfit.

In January last year, Shakoor Ahmed, a personal security officer (PSO) of Deputy Superintendent of police Bijbehara in Anantnag district had escaped from the residence of the officer with four service rifles.

Yet another policeman Naseer Ahmed Pandit, a resident of southern Pulwama district, had decamped with two AK rifles on March 27, 2015 from the residence of PDP Minister Altaf Bukhari in Srinagar and subsequently joined the Hizb-ul-Mujahedeen. He was, however, killed in an encounter in Shopian district in April 2016.