The seats where Lok Sabha by-elections will be held are Dadra and Nagar Haveli, Mandi in Himachal Pradesh and Khandwa in Madhya Pradesh 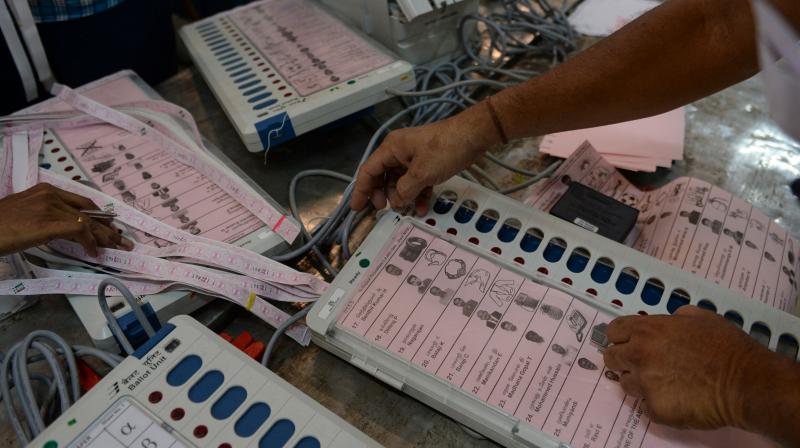 The counting of votes will take place on November 2. (Representational Photo: AFP)

New Delhi: Bypolls to three Lok Sabha seats and 30 assembly constituencies spread across various states will be held on October 30, the Election Commission announced on Tuesday.

The counting of votes will take place on November 2.

The seats where Lok Sabha by-elections will be held are Dadra and Nagar Haveli, Mandi in Himachal Pradesh and Khandwa in Madhya Pradesh.

The assembly bypolls will be held in 30 seats spread across 14 states.

Five seats are in Assam, four are in West Bengal, three each are in Madhya Pradesh, Himachal Pradesh and Meghalaya, two each are in Bihar, Karnataka and Rajasthan and one each is in Andhra Pradesh, Haryana, Maharashtra, Mizoram, Nagaland and Telangana.

"The Commission has reviewed the situation related to pandemic, flood, festivals, cold conditions in certain regions, feedback from concerned States/UT and taken into consideration all facts and circumstances and it has decided to hold by-elections to fill vacancies in three Parliamentary Constituencies of UT of Dadra & Nagar Haveli and Daman & Diu, Madhya Pradesh and Himachal Pradesh and 30 vacancies in Assembly constituencies of various states," the EC said in a statement.

The EC had then said that based on inputs received from states where bypolls are due, it has decided not to hold by-elections in other assembly constituencies and three parliamentary constituencies in view of the pandemic situation, floods and festival season.