The CM exhorted students to clear all their doubts and apprise him of them but asked them to keep the interaction to themselves. 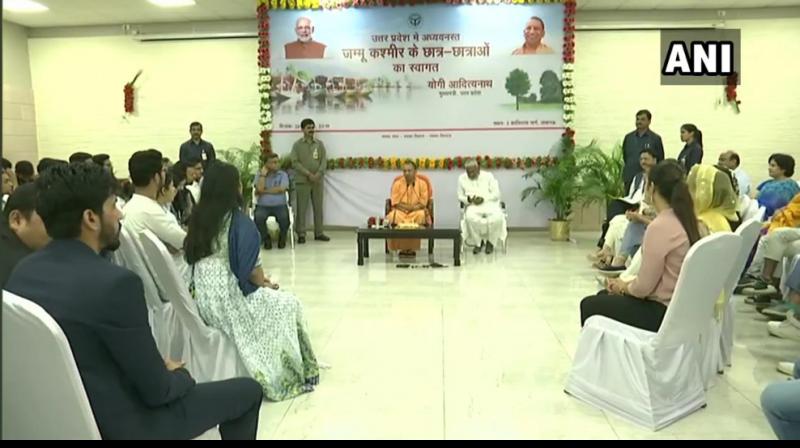 The students were earlier brought to the chief minister's residence, the venue of the interaction, under heavy security. (Photo: ANI)

Lucknow: Uttar Pradesh Chief Minister Yogi Adityanath, on Saturday, met a group of Kashmiri students and talked of the importance of dialogue in democracy while urging them to share their trial and tribulations directly with him to resolve them.

"We are living in a democratic society and it should be kept in mind that dialogue could be the most important medium in it. We have to make new efforts with this view in mind," the chief minister said while interacting with a group of 70 Kashmiri students studying in different colleges in the state.

"We also need to understand what democracy actually means. There will be prosperity in our lives only when there is development. How could we become a part in the development process?" he said, adding the common people want basic facilities and employment guarantee.

The Kashmiri students studying in the Aligarh Muslim University had on Friday decided against participating in the event meant to discuss "advantages" of the nullification of Article 370.

There are over 1,300 students from Kashmir valley studying in AMU. In his interaction, the chief minister exhorted students to clear all their doubts and apprise him of them but asked them to keep the interaction to themselves.

"We will find a solution to issues that concern us and create a better atmosphere," he stressed.

Asking them to share their views decently, Yogi said, "If you have any suggestion, tell us. If you find anything wrong, remain calm and tell me about it separately. This will help create a better atmosphere," he said.

"There are numerous students belonging to Kashmir studying in Uttar Pradesh. We will sit with them in Greater Noida soon and try to resolve all their problems concerning the local administration," he said, adding there are several students from Jammu and Kashmir studying in places like Aligarh, Ghaziabad and Noida.

On the occasion, he also elaborated upon his government's schemes. The students were earlier brought to the chief minister's residence, the venue of the interaction, under heavy security.

Media was kept away from the event barring an electronic channel which was only allowed to telecast the CM's address.