Dhaliwal, who was in his early 40s, was the first police officer in Texas to serve while keeping his Sikh articles of faith. 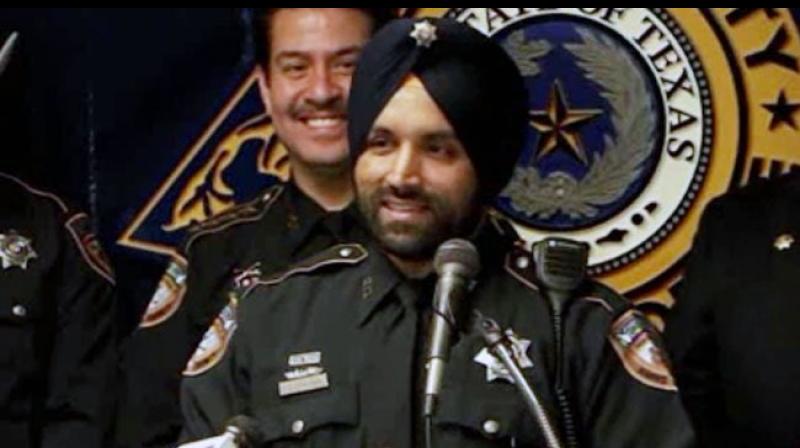 Houston: A trailblazing Indian-American Sikh police officer, who made national headlines when he was allowed to grow a beard and wear a turban on the job, has been shot and killed in an "ambush-style" attack in a "ruthless, cold-blooded way" in the US State of Texas, a senior official said on Saturday.

The officer said Dhaliwal, 42, was taken by helicopter to a hospital where he died, a decade after becoming the force's first Sikh and pushing for a historic expansion of religious rights in the department.

"I'm sad to share with you that we've lost one of our own. Our HCSO Texas was unable to recover from his injuries. There are no words to convey our sadness," Gonzalez said in a tweet.

"We mourn the loss of a wonderful father, husband, son brother, friend, and last but not least, a Texas Peace Officer," he said.

Gonzalez said Dhaliwal, who kept his Sikh articles of faith including a turban and beard, stopped a vehicle with a man and woman inside.

Dhaliwal worked with United Sikhs, a global humanitarian relief and advocacy nonprofit, to help organise the donation of truckloads of supplies for first responders after Hurricane Harvey.

"Deputy Dhaliwal is known to everybody as someone with a giving heart. Post (Hurricane) Harvey, when we needed the help most, he brought an 18-wheeler of people that he gathered together, that came all the way from California to deliver goods to our community," Gonzalez said.

Robert Solis, 47, has been charged with capital murder in connection with Dhaliwal's murder, the sheriff's office said in a tweet.

A weapon was recovered that deputies believe was used to kill Dhaliwal, Gonzalez said. "It's the worst day, the worst nightmare for any police executive," Gonzalez said.

Garcia implemented a religious accommodation policy that allowed Dhaliwal to wear the traditional turban and beard of the Sikh religion.

Dhaliwal was married and was a father of three children.

"Deputy Sandeep Dhaliwal was a trailblazer. He was an example for many. He represented his community with respect and pride," Garcia said.

Since 2015, Dhaliwal was the "history-making" police officer in Texas to serve while keeping his Sikh articles of faith.

He was allowed to wear the turban and beard while patrolling the streets in order to bolster cultural diversity.

With this policy, one of the largest sheriff's offices in the country had affirmed that a person does not have to choose between their faith and a career of service.

Since 9/11, misperceptions about Sikhs' religiously mandated turbans and beards have led to an increase in discrimination against the community.

Policy changes like that at the Harris County Sheriff Office and other law enforcement agencies across the country aim to combat this stigma while also giving qualified men and women a chance to serve the community.

Houston Mayor Sylvester Turner tweeted on Friday night saying Dhaliwal "represented the diversity and inclusiveness of our community and everything that is good."

Texas Governor Greg Abbott released a statement Friday saying "this tragic loss is a grave reminder of the risks that our law enforcement officers face every single day."

"I thank the officers who bravely responded to apprehend the suspect, and I assure you that the state of Texas is committed to bringing this killer to justice," Abbott said.