India   All India  28 Sep 2019  Kashmir Valley under siege again, lockdown in many areas
India, All India

Kashmir Valley under siege again, lockdown in many areas

The police also warned residents of “action under law” if they defied the restrictions. 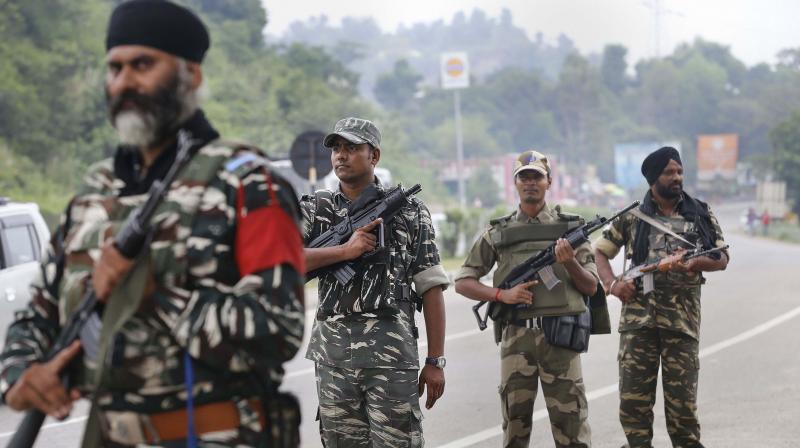 Srinagar: Several areas in Jammu and Kashmir’s summer capital Srinagar and half-a-dozen other towns of the Valley remained under strict security lockdown on Friday.

Overnight, the J&K police and Central Armed Police Forces had sealed roads in sensitive and congested areas of Srinagar and other towns by laying concertina razor wires and placing “bunker vehicles” in their middle to prevent people coming out of their homes.

At dawn, mike-fitted police jeeps announced that curfew-like restrictions have been imposed under Section 144 CrPC and that people should stay indoors. The police also warned residents of “action under law” if they defied the restrictions.

Elsewhere in the restive Valley, the presence of policemen in riot gear in the streets was extraordinary as the authorities had a day earlier put entire region on high alert after reports that militants and their supporters might carry out “some demonstrative and sensational acts of terror”.

However, security restrictions were enforced in Srinagar areas and the towns of Anantnag, Sopore, Handwara, Gand-erbal and Awantipora severely, mainly to thwart probable protests ahead of the speeches of Prime Minister Narendra Modi and his Pakistani counterpart Imran Khan at the 74th session of the United Nations General Assembly (UNGA).

While New Delhi has already made it clear that it will not mention Kashmir at all during the time allotted to it at the global forum as abrogating Jammu and Kashmir’s special status under Article 370 of the Constitution and bifurcating the state into two Union Territories (UTs) is an entirely internal issue, many people in the Valley believe that Pakistan’s Prime Minister Imran Khan will seize the opportunity to raise the Kashmir issue and the prevailing stalemate in the Valley “strongly” and “vociferously” in course of his speech on Friday night.

Strangely, many people in the Valley also expect that “something big” will unfold with regard to Kashmir during the UNGA session. In view of this supposition, the authorities were anticipating people might hold protests on Friday, particularly after the weekly congregations at mosques and hospices and that attempts at disturbing peace could also be made in some parts of the Valley.

The police sources said that while the situation remained by and large peaceful across the Valley, at least, three Srinagar areas- Channapora, Sekidaffar and Anchar witnessed such protests in the afternoon. Also, irate crowds and stone-melting mobs clashed with the security forces at two other places – Habak-Zakura and Safa Kadal.

A youth wearing three-hole balaclava to hinder recognition at Anchar after chanting “we want freedom” also said, “After God, we do trust Imran Khan.” Earlier, a resolution adopted at a Friday congregation in the area said, “Kashmir can’t be resolved through military might or by twisting the arm of its people. Such behavior only causes deepening of anger and hatred among the people of Kashmir against the tormentor.”

A statement issued by the government after National Security Advisor (NSG) Ajit Doval concluded his 36-hour-long visit of Kashmir on Thursday had said that the Valley has been put on high alert after reports that Pakistan-sponsored militants may carrying out attacks in coming days. It said, “In view of the reports that Pakistan sponsored terror outfits may carry out some demonstrative and sensational acts of terror, the NSA directed that security of vital installations must be ensured and all arrangements regarding strict vigilance and keeping the troops on alert be made a priority”.

It further said that while interacting with the officers of the Army and the Border Security Force (BSF), the NSA “stressed that in view of the reports of large scale infiltration attempts, anti-infiltration grid along the border be kept at high alert and wherever attempts of infiltration are reported, strong action must be taken”.