The Kerala government would give the names of the recently retired high court judges, out of which top court would pick one. 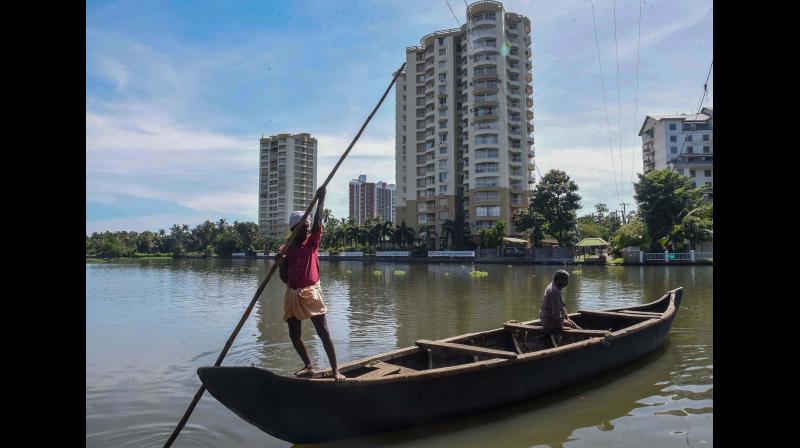 A view of Alfa Serene Apartments at Marad built on the coastal zone in Kochi on Friday. (Photo: PTI)

New Delhi: The Supreme Court on Friday ordered the Kerala government to pay Rs 25 lakh interim compensation to each of the 400 flat owners of Maradu in the port city of Kochi that have been ordered to be demolished for being constructed in breach of the Coastal Regulation Zone (CRZ) guidelines.

Ordering the compensation of Rs 25 lakh each, a bench of Justices Arun Mishra and S. Ravinder Bhat gave its nod to the Kerala government’s suggestion to set up a three-member committee headed by a retired judge of the Kerala high court with a bureaucrat and a technical member to supervise the demolition of 400 odd flats and determine the compensation to be paid to the owners of the flats which are going to be demolished.

The three-member committee to be headed by a retired judge of the Kerala high court would also fix responsibility on the officials responsible for the construction 400 plus flats in violation of the CRZ guidelines.

The Kerala government would give the names of the recently retired high court judges, out of which top court would pick one. The money that would be paid to the affected flat owners would be recovered from the builders/promoters of the project under which there flats were constructed.

“The court will quantify the damages and recover from the builders,” Justice Mishra said, adding, “Builder can’t be allowed to walk away.”

The owners of the flats that would be demolished should be paid, Justice Mishra said pinting out that it is their “right” to get compensation and not a matter of compassion as suggested by a lawyer.

While issuing a notice to the builders/promoters of the Maradu project, the top court has sought the list of the director/promoter/partners of the builder company and their assets.

The court recorded as undertaking an oral statement by the chief secretary Tom Jose that the flats would be demolished in 138 days for which the tendering process was on.

Appearing for Kerala government, senior counsel Harish Salve told the court that as per plans the demolition of flats and clearing of debris would take 120 days – 90 days for demolishing 400 odd flats and 30 days for removing the debris.

He said that the tenders have already been floated ands would be finalized by October 9 and the successful bidder would be awarded contract by October 11.

Pointing out that the flats to be demolished are spread over an area of 5000 sq, yard, Salve said that in first instance these flats should not have been built but now when are being demolished it should not compound the damage to environment.

The court said that if the orders of the court were fully complied with, then the personal presence of Chief Secretary Tom Jose would be dispensed with.

The top court by its May 8 order had directed the demolition of the flats as they were constructed in breach of the Coastal Regulation Zone guidelines and proper approval.

The top court by its September 6, 2019, order had set a deadline of September 20, 2019, for the demolition of the flats that were unauthorisedly constructed.

Will move out after we get Rs 25 lakh: Residents
The residents of the 360-odd flats at Maradu did not have much to rejoice in the verdict of the Supreme Court, but they were relieved by the fact that for the first time the court had recognised them as an aggrieved party. Many of them said that they were ready to move out once they were given Rs 25 lakh initial solatium and a suitable flat to live. The residents of H2O Holy Faith and Jain Coral Cave took this decision on Friday afternoon expecting to get a positive result in the long run. “We should be given ample time to move out and till then the state government should take steps to provide us power and water supply. Several residents are abroad and they should be given time to come,” said Shamsudeen Karunagappally, chairman of Maradu Bhavana Samrakshana Samithi.