The Prime Minister signed a message paying homage to martyrs, took a round of the exhibition, and paid floral tributes to martyrs. 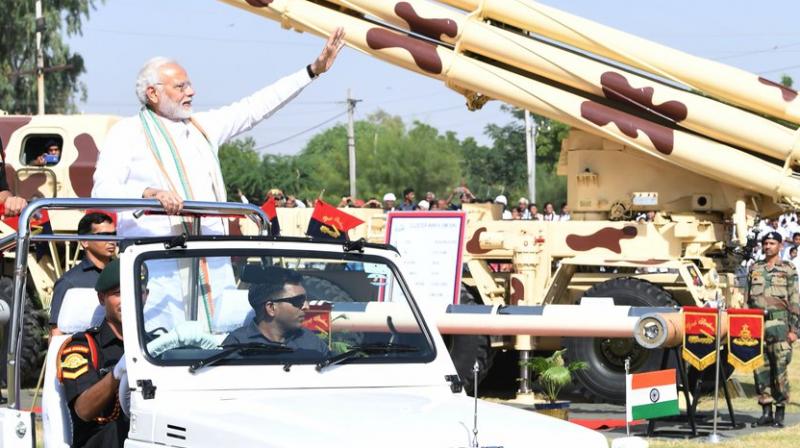 Jodhpur: Prime Minister Narendra Modi Friday inaugurated “Parakram Parv” exhibition at the military station in Jodhpur to mark the second anniversary of the surgical strikes carried out by the Indian Army across the LoC.

Soon after his arrival at the Battle Axe Ground at the military station, the Prime Minister first signed a message paying homage to martyrs and took a round of the exhibition, showcasing combat capabilities of the Indian Army.

On September 29, 2016, the Indian Army carried out surgical strikes on seven terrorist launch pads across the Line of Control (LoC) as a response to an attack on its base in Uri earlier that month. The Army had said its special forces inflicted "significant casualties" on terrorists waiting there to cross into Indian territory.

The defence minister had announced last week that various events will be held from September 28 to 30 to commemorate the valour of soldiers.

After taking a round of the exhibition, PM Modi and Sitharaman proceeded to attend the Combined Commanders' Conference scheduled at the Jodhpur Airforce Station.

"The conference will have deliberations among the Prime Minister, Defence Minister, chiefs of all the 3 defence services and some senior officials on some general and contemporary issues on national concern”, said Defence Spokesperson Colonel Sombit Ghosh.