India   All India  28 Sep 2018  India-Pakistan foreign ministers avoid each other at SAARC meet
India, All India

India-Pakistan foreign ministers avoid each other at SAARC meet 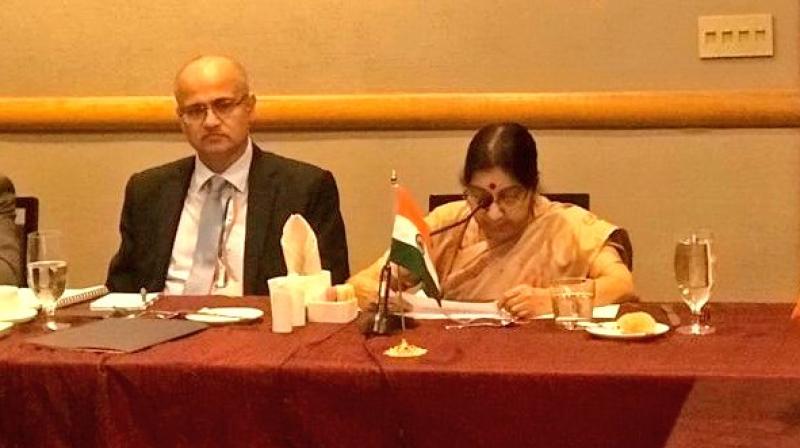 Before Swaraj left, she made India's stance clear at the SAARC meeting that India won't engage in regional cooperation when terrorism is the single-largest threat to peace and stability in South-Asia. (Photo: Twitter | @MEAIndia)

“I am not hesitating in saying that for the progress and success of the SAARC and for the connectivity and prosperity of the region, there is only one obstacle. The attitude of only one country is hampering and not letting the spirit of the SAARC and of the founding fathers fulfilled,” Qureshi said, adding “When it comes to any positive gesture from India's side, all I can say is that she left the meeting midway, maybe she wasn't feeling well."

Before Swaraj left, she made India's stance clear at the SAARC meeting that India won't engage in regional cooperation when terrorism is the single-largest threat to peace and stability in South-Asia.

"The number of threats and incidents that endanger South Asia are on the rise. Terrorism remains the single-largest threat to peace and stability in our region, and indeed in the world. It is necessary that we eliminate the scourge of terrorism in all its forms, without any discrimination, and end the ecosystem of its support," the External Affairs Minister said.

"I would like to stress that meetings, including high-level ones can only be effective if expressions of resolve are translated in to concrete action on the ground," Swaraj added.

The talks between the foreign ministers of India and Pakistan on the sidelines of the UNGA were called off by India after three policemen were kidnapped and killed by terrorists in Jammu and Kashmir’s Shopian district. Pakistan’s move to release stamps glorifying terrorist Burhan Wani, who was killed by the security forces in 2016, was also among the reasons for calling off the proposed talks between the two countries.

Terming Sushma Swaraj's statement at the meeting "very vague", Querishi said, “She (Swaraj) talked about regional cooperation. My question is that how is regional cooperation possible if the nations in the region are ready to sit and you are the obstacle in those talks."

The SAARC (South Asian Association for Regional Cooperation) grouping that includes India, Pakistan and six other regional countries was established in December 1985 with an aim to promote the welfare of the people of South Asia.