India   All India  28 Sep 2018  A new paradigm for eliminating poverty
India, All India

A new paradigm for eliminating poverty

Rural policies following this approach should be designed and implemented in the way best adapted to the needs of the communities they serve. 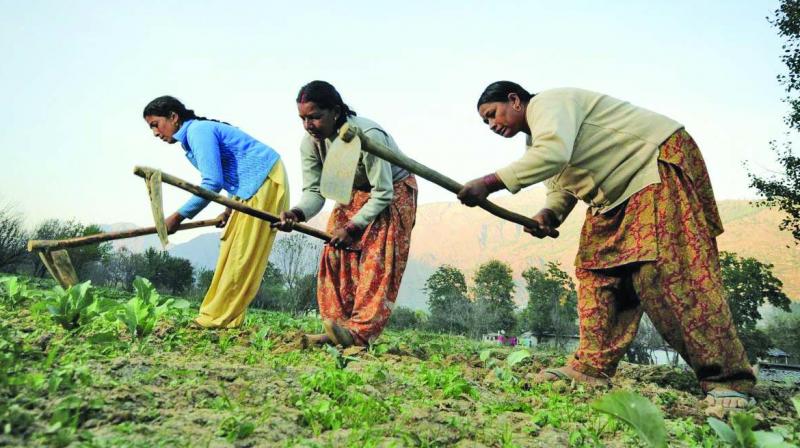 In India, over a hundred schemes are delivered to the same set of beneficiaries through mutually insulated administrative silos, set up by Central government ministries intent on jealously guarding their respective fiefdoms.

According to the 2018 global Multidimensional Poverty Index (MPI) of the United Nations Development Programme (UNDP) and the Oxford Poverty and Human Development Initiative (OPHI), more than 270 million people in India moved out of poverty in the decade since 2005-06 and the poverty rate in the country nearly halved over the 10-year period.

While these figures are quite cheering, they may not reflect the true conditions of the disempowered. It is difficult to be hooked by the bookish definitions of poverty: this much income or that much calorie intake. Poverty should actually imply the absence of adequate nutrition, clean water, basic sanitation, healthcare, education and lack of enforcement of key constitutional rights. When the poor are living on the edge of subsistence, a minuscule misfortune can push them down into a tailspin. With nearly four out of five Indians living in poverty, millions are caught in a lethal web. Illnesses become a financial sinkhole for village women; they are often forced to drop out of the labour force as they provide most of the care.

The real story of development finance is neither the numbers nor rapid growth. In fact, it is about the slow movement — a value-based, de-risked, diverse, widely-spread, bottom-up social transformation. The exact opposite of the dizzying development in financial markets around the world. That’s why it merits discourse. As a society, we have often looked for models that we hope will trickle down. Maybe it is just the right time for some lift. There are also attempts to subvert the ethic, some by entrepreneurs pushing ultra-rapid growth and some by politicians who love to give away freebies at no cost to themselves. But there have been genuine attempts by innovative and committed managers that have brought new hope for the poor, particularly the women among them.

In India, over a hundred schemes are delivered to the same set of beneficiaries through mutually insulated administrative silos, set up by Central government ministries intent on jealously guarding their respective fiefdoms. Convergence of schemes at the delivery point becomes virtually impossible, thus depriving beneficiaries of the multiplier effect that would operate if the beneficiaries themselves, through their locally elected leaders, were to have the authority to plan and implement the utilisation of these resources in keeping with their own respective priorities. In this backdrop, the argument for a systemic reordering of the delivery mechanism to shift from bureaucratic delivery to participatory development runs much deeper.

Rural policies following this approach should be designed and implemented in the way best adapted to the needs of the communities they serve. One way to ensure this is to invite local stakeholders to take the lead and participate. The involvement of local actors includes the population at large, economic and social interest groups and representative public and private institutions. Capacity building is an essential component of the bottom-up approach, involving:
w awareness raising, training, participation and mobilisation of the local population to identify the strengths and weakness of the area (analysis);
w participation of different interest groups in drawing up a local development strategy;
w establishment of clear criteria for selection at local level of appropriate actions (projects) to deliver the strategy.
In many places, those programmes have become essential buffers against drought and landlessness, but they also have been plagued by waste and corruption, a record cited by those who argue that a nationwide employment programme would funnel more money, not to the poor, but rather to corrupt politicians, bureaucrats and local power brokers. Now a number of organisations have shown that such projects can work, that grassroots capitalism is one of the best routes out of poverty.

While it will not solve India’s deep-rooted agriculture problems, better information can significantly boost food production and rural incomes. Although there is much discussion in public forums of involving stakeholders for appropriate development of the society in which the poor live, poor people rarely get the opportunity to develop their own agenda and vision or set terms for the involvement of outsiders. The entire participatory paradigm illustrates that people are participating in plans and programmes that we — outsiders — have designed. Not only is there little opportunity for them to articulate their ideas, there is also seldom an institutional space where their ingenuity and creativity in solving their own problems can be recognised, respected and rewarded. The situation of the proverbial cart having been placed before the horse. Any such project requires meticulous planning and careful implementation, involving complete and accurate information on all the important variables to be dealt with: socio-cultural, environmental and economical aspects.

A better approach to eliminate poverty, however, would be to make the environment conducive to increased flow of credit to the poor, leaving micro-level credit management to financial institutions, and transferring the subsidy from the individual level to the community level for human capital formation of the poor and developing physical infrastructure useful to them. The government’s involvement must be confined to macro affairs such as policy formulation, framing incentive.

True development involves a transformation of the state of a human being. However, such a transformation must have the active involvement and participation of those being affected by it. True development is one that transforms groups without destroying their culture, traditions, environment, livelihood and social patterns, which must be preserved and protected because they are central to the very life of the people. The forests around them provide food, medicine and livelihood — a sustainable solution to the triple whammy of food security, healthcare and employment which the state is ill-equipped to address. True development shouldn’t translate into development as seen by the elite. It must be development as seen by those whose lives are to be transformed.

What we need is empathy — not a form of empathy that comes from superiority, but one born from a profound humility. Empathy helps not only in understanding and treating one another better, but it’s also a key currency in a world defined by connectivity and change. Empathy doesn’t just mean treating others better — it means doing better.

A development strategy that has been successful in one village may not necessarily give the same results in a neighbouring village. Hence, the renewed emphasis of planners on area specific plans. Transplanting cultures has been a favourite idea of armchair development experts, but time has shown that nothing could be as damaging as the imposition of alien culture. Each society, howsoever nascent, has a social and cultural apparatus that regulates and balances the divergent traits and traditions. I have always been guided by Paul Devitt’s famous words: “The poor are often inconspicuous, inarticulate and unorganised. Their voices may not be heard at public meetings, in communities where it is customary for only the big men to put in their views. It is rare to find a body or institution that adequately represents the poor in a certain community or area.”

The reforms in the areas of land, water, forests and environment will be ineffective if they don’t give space to the voice of those affected by the reforms. These communities comprise 85 per cent of the country’s population, yet none fined even half a per cent space in these seminars and conferences, particularly when we are deliberating programmes targeted towards women.

The idea is to use local wisdom before we involve expertise from outside. Encourage private initiative without commercialising education. Give private initiative more responsibility, more space, more freedom. As things stand now, the formal system alone cannot answer the challenge of rural education. It destroys initiative and creativity. Tackling poverty requires a fundamentally different approach: one that encourages the initiative, creativity and drive from below that must be at the core of any transformation of their lives that is to be lasting.