On ICGS Vigraha, he said 'from its design conception to development, the ship is completely indigenous' 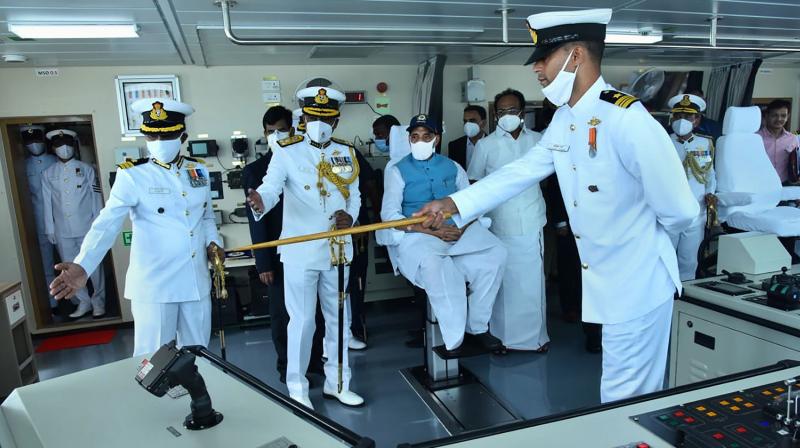 Chennai: Defence Minister Rajnath Singh on Saturday said the country has "great scope" to become an indigenous ship-building hub, while pointing out that the Centre has introduced policies to help the domestic industry become world class.

In his address at an event to mark the commissioning of Indian Coast Guard Ship (ICGS) 'Vigraha,' the last of the seven Offshore Patrol Vessels (OPVs), here, Singh said in the next two years, the expenditure on security around the world will reach USD 2.1 trillion.

"Most of countries do not even have this level of budget for a whole year. And it is expected to increase manifold in the next five years. In such a situation, today we have great scope to make full use of our capabilities, take advantage of policies, and move towards making the country an indigenous shipbuilding hub."

"I am happy to say that considering these possibilities, the government has already brought out such policies which helps our domestic industry, be it public or private sector entity, to become world class players," Singh said.

On ICGS Vigraha, he said "from its design conception to development, the ship is completely indigenous."

Further, for the first time in the history of Indian defence, contract for not one or two, but seven vessels has been signed with a private sector company, Larsen and Toubro Limited, he noted.

"And more importantly, within seven years of signing this agreement in 2015, not only launch but also the commissioning of all these seven vessels has been completed today," he said.

The 98-meter vessel, with a complement of 11 officers and 110 sailors, has been designed and built indigenously by Larsen & Toubro Ship Building Limited.

It is fitted with advanced technology radars, navigation and communication equipment, sensors and machinery capable of operating in tropical sea conditions, a Defence statement said.

The ship is also capable of carrying pollution response equipment to contain oil spill at sea, it said.

The vessel is armed with a 40/60 Bofors gun and fitted with two 12.7 mm Stabilised Remote Control Gun with fire control system, it said, adding the OPV will be based at Vishakhapatnam in Andhra Pradesh.