60 per cent of affected children belong to the OBC category. 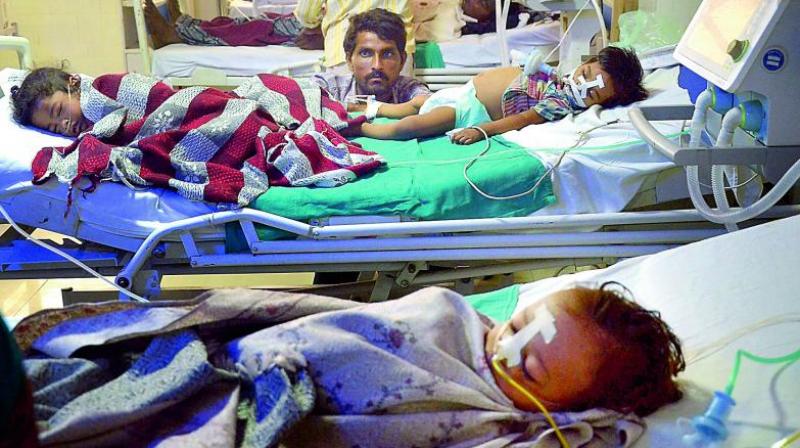 Another data by National Vector-Borne Disease Control Programme and BRD Medical College indicates that one in four encephalitis cases in India were from Gorakhpur. (Photo: PTI)

Lucknow: Nearly 60 per cent of children, who suffer from encephalitis, belong to Other Backward Castes (OBC) while 28 per cent come from Scheduled Caste (SC) families.

According to a survey conducted by the UP health department, 62 per cent of the families lie below the poverty line and their fathers worked as agricultural labourers.

Conducted by a social organisation, the survey looked into the social aspects of encephalitis.

Another data by National Vector-Borne Disease Control Programme and BRD Medical College indicates that one in four encephalitis cases in India were from Gorakhpur.

It also stated that 40 per cent of encephalitis death reported in the country took place in BRD Medical College. Prof K S Jacob, health policies commentator and analyst, said, “Caste is a major factor in the health situation and various government data, including National Family Health Survey, shows the gap between the state of health of Scheduled Castes, Scheduled Tribes, and other Backward Castes”.

He further pointed out that people belonging to the lower castes have minimal access to clean water, sanitation, healthcare, housing, nutrition.  Also, they suffer because of ineffective policies and programmes, unfair economic system and ‘bad politics’.

The UP health department cited Prof Jacob’s opinion in its presentation that was based on an internal assessment of 1741 cases. The presentation also quoted public health specialist from Johns Hopkins University, Dr Vishwajit Kumar, who has said that in the health sector, caste is a major point of reference.