According to reports, Justice Misra was nominated in July by CJI Khehar for the top judicial post. 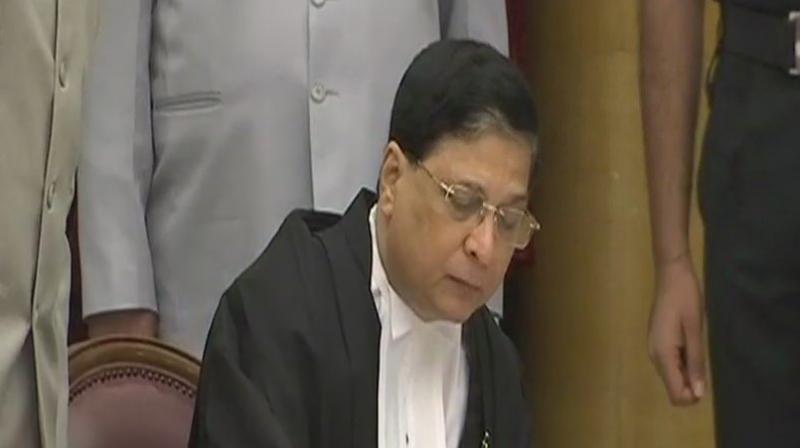 New Delhi: Justice Dipak Misra, who was part of the bench that confirmed the death sentence of the four convicts in the December 16 gangrape case and passed the order for the mandatory singing of the national anthem in cinema halls, was on Monday sworn in as the 45th Chief Justice of India.

At a brief ceremony in the Darbar Hall of Rashtrapati Bhawan, President Ramnath Kovind administered the oath of office to Misra. Justice Misra took the oath in English in the name of God.

Justice Misra will remain in office until October 2, 2018. As per the established practice, Justice Khehar had named Misra as the next CJI in July.

He was the chief justice of the Patna High Court and the Delhi high court before being elevated to the apex court in October 2011. After his enrolment as an advocate in 1977, Justice Misra practised in constitutional, civil, criminal, revenue, service and sales tax matters in the Orissa High Court.

He was appointed as an additional judge of the Orissa High Court on January 17, 1996, before his transfer to the Madhya Pradesh High Court. He became a permanent judge on December 19, 1997.

Justice Misra is currently presiding over a bench hearing the Cauvery and Krishna river water disputes, BCCI reforms and Sahara case among others.

He headed the bench that passed the order for the mandatory singing of the national anthem in cinema halls across the country. He was also part of the bench that upheld the death sentence given to the convicts in the December 16, 2012, gangrape case.

Justice Misra, along with Justice P C Pant, had in May, declined to de-criminalise defamation, an offence punishable with two years in jail apart from fine, saying the right to free speech cannot mean that a citizen can defame anybody.