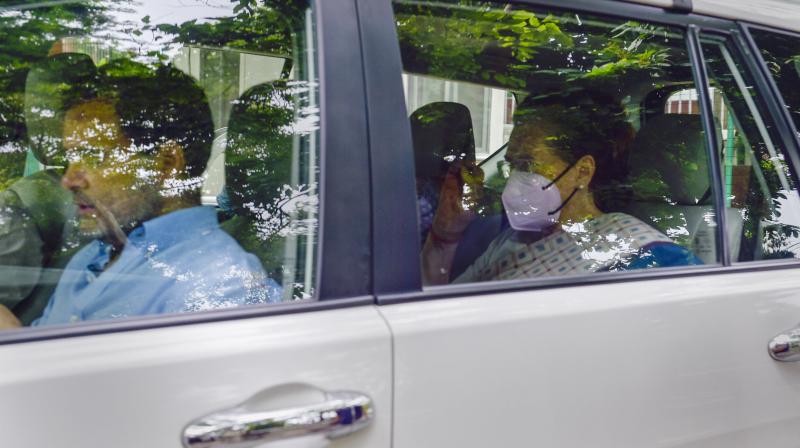 Congress President Sonia Gandhi leaves from her residence to appear before the Enforcement Directorate for questioning in connection with the National Herald case, in New Delhi. (PTI Photo/Vijay Verma)

New Delhi: As the ED questioned Congress president Sonia Gandhi for the third time, Congress MPs protested at Vijay Chowk over the government’s alleged misuse of investigative agencies and called it “murder of democracy”, claiming the Centre was trying to usher in an “Opposition-mukt Bharat”.

She was given no fresh summons amid indications that her questioning might be over for now. Mrs Gandhi reached the ED’s office at 11 am accompanied by her daughter Priyanka Gandhi Vadra and son Rahul Gandhi.

The session began at around 11.15 am. She left the ED office at around 2 pm along with Ms Vadra, who stayed with her all through at the ED’s headquarters to provide any assistance or medical care, if needed, to her mother.

The sleuths’ questioning pertains to the charge of alleged financial irregularities in the Congress-promoted Young Indian Pvt Ltd, which owns the National Herald newspaper.

The protesting MPs were detained by the police. Congress MP Jairam Ramesh tweeted: “For the third day, Congress MPs staging legitimate and peaceful protests at Vijay Chowk have been taken away to God (and PM and HM know) alone knows where. This is Muzzling Of Democracy in India in action!” Mahila Congress and Youth Congress workers protesting against the alleged misuse of investigative agencies outside the AICC headquarters were also put in police buses and detained. On Tuesday , several MPs trying to march to Rashtrapati Bhavan were detained by the police. Several Opposition parties had written a memorandum to the President of India underscoring the “misuse of agencies” by the Central government against political opponents.

Earlier, Congress leaders Rahul Gandhi, Mallikarjun Kharge and Pawan Bansal had been questioned by the ED in the National Herald case. The Congress insists that there has been no wrongdoing on the part of their leaders in the matter. The Congress claims that Young Indian Pvt Ltd is a “Section 25” company, meaning no money can be taken out to benefit its shareholders.

I&B minister Anurag Thakur hit out at the Congress, accusing it of trying to “mislead and pressure” Central probe agencies through street protests. BJP president J.P. Nadda said the Opposition party thinks that “one family is above the law”. Describing the protests by the Congress as an “attempt to hide the truth”, Mr Nadda added: “But this wouldn’t work in this country as the laws and rules are equal for all.”

Noting that everybody is answerable in front of the law, the BJP president said: “Gandhis should answer the investigation agencies, but they think that they are above the law.” Underlining that the Supreme Court has upheld the Prevention of Money Laundering Act (PMLA) and the ED’s jurisdiction, Mr Nadda said: “The law is taking its own course and we all must respect the law of the land.”