India   All India  28 Jul 2019  Robert Vadra posts on social media about cow that can predict future!
India, All India

Robert Vadra posts on social media about cow that can predict future!

Vadra narrated about meeting a cow, who apparently predicts the future through a nod of its head. 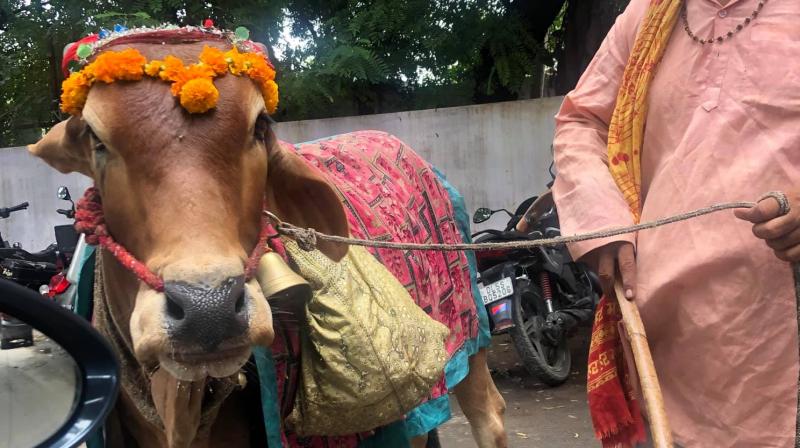 'You could also know your future by a sacred cow, who nods its head in agreement,' Robert Vadra said. (Photo: Facebook)

New Delhi: Expressing his love for the diversity and versatility of India, businessman Robert Vadra on Sunday shared pictures and a video chronicling his experience of an outing on the streets while talking about a 'cow which tells the future'.

"Love India for its diversity and versatility!!
"You can go out in the streets and learn soo much ... help people, and see the appreciation in their large genuine smiles and get roses in return..." wrote Vadra alongside three pictures of a group of smiling children, apparently selling roses.

Congress General Secretary Priyanka Gandhi's husband Vadra also narrated about meeting a cow, who apparently predicts the future through a nod of its head.

"You could also know your future by a sacred cow, who nods its head in agreement. Love being part of this amazing country", he wrote while sharing a picture and video of the cow.

In the short video, Vadra can be heard having a conversation with a priest who is seen tugging the cow along.
"Will she tell me everything", Vadra is seen asking the priest.

The priest responds with: "Yes, she will tell everything and will bless you. This is the sacred month of Sawan"

He then urges the cow to go towards Vadra who is seated inside his car.

Vadra is often very active on social media and keeps sharing posts, including his visits to different places and his opinions on various issues.