If at all there will be 'mukt bharat', it will be BJP-mukt: P Chidambram

Chidambaram asked his party workers not to get fooled by the 'BJP's propaganda of Congress-mukt Bharat'. 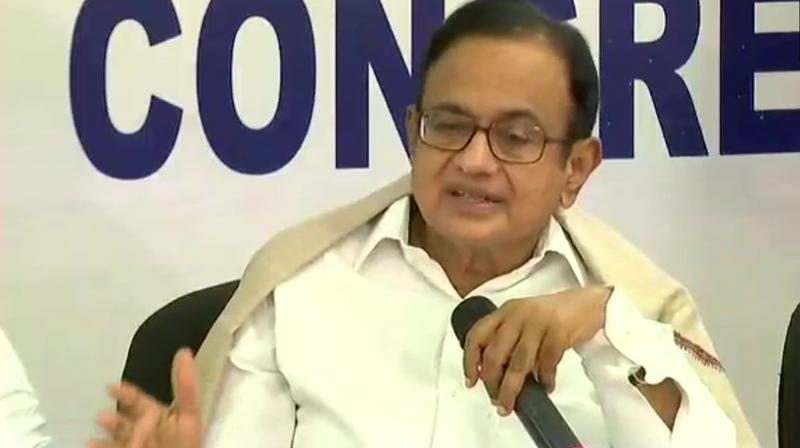 Chidambaram launched project 'Shakti' in Karnataka for the Congress workers, with an aim to strengthen the party's ground organisation by connecting workers across every booth, village, block, town and districts. (Photo: ANI | Twitter)

Bengaluru: Senior Congress leader P Chidambaram on Saturday asked his party workers not to get fooled by the "BJP's propaganda of Congress-mukt Bharat", saying if at all there was a "mukt Bharat, it would be BJP-mukt".

The former Union minister said that things had changed from the time when the Congress was an "unchallenged" political party in India and stressed on the need to strengthen it at the booth level, reminding that now elections were fought at that level.

"There was a time when all that the Congress had to do was to mention the name of Jawaharlal Nehru or Indira Gandhi and then millions of people would simply come to the booth and vote," Chidambaram said.

"It is a booth-wise election now, which is why in every booth we must be present... We must have enough people in every booth... What matters now is the number of feet on the ground," he added. He said, that was the time when the Congress was an "unchallenged" political party in India, but things had changed, as they would in any country.

Chidambaram claimed that in Karnataka, the presence of the Congress was stronger than that of the BJP, as the party secured 38 per cent vote, while, the BJP got 36 per cent.

"We had 2 per cent advantage in votes, but we had a 24 seat deficit," he said, adding that the analysis showed that in coastal Karnataka the BJP's vote share went up to 50 per cent but in old Mysuru it dropped to almost 17 per cent. The vote can go up in some areas and come down in some, which means it can make a big difference to the seats, said Chidambaram and claimed that the Congress' presence was more or less uniform across the state.

He launched project 'Shakti' in Karnataka for the Congress workers, with an aim to strengthen the party's ground organisation by connecting workers across every booth, village, block, town and districts. Party workers could enrol in the project by sending an SMS containing their voter ID card number to a dedicated number, party officials said, adding that 'Shakti' would enable booth-level workers to engage with local leadership on various issues.

Emphasising the need for micro-management of every booth, Chidambaram set August 15 as the deadline for enrolment of lakhs of the workers for the project.

"Massive enrolment should take place beginning today and we must have some result by August 15... I'm absolutely sure with Project Shakti the Congress will multiply its numbers dramatically and in months to come we will have a very strong ground force and get ready for the Parliament election whenever it takes place," he added.