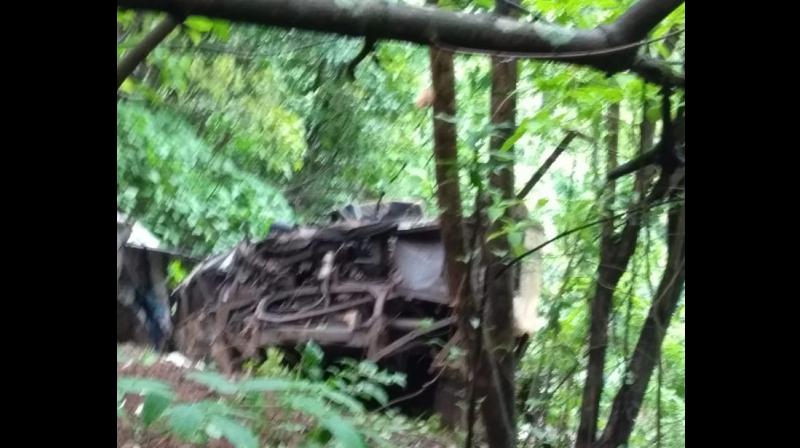 33 people, including students, were killed when a bus with 34 people on board fell off a mountain road in Ambenali Ghat, in Raigad district of Maharashtra. (Photo: Twitter | ANI)

Mumbai: Thirty three students and staff of an agricultural university in Maharashtra were killed when the bus they were travelling in skidded off a mountain road in Ambenali Ghat, Raigad district on Saturday afternoon.

The police said 11 bodies have been recovered from the accident site.

According to reports, the bus skidded off the road while passing through the mountainous region and fell 500 feet down the deep gorge.

"We have confirmed 33 deaths and only one person managed to survive the bus crash. Our team is trying to recover the bodies," National Disaster Response Force (NDRF) Commandant Anupam Srivastava told news agency AFP.

The bus had staff members of the Konkan Krishi Vidyapeeth Agriculture University (Dapoli), who were on their way for a picnic to Mahabaleshwar when the accident took place.

The lone survivor of the accident crash managed to clambered up the mountain side and alerted the police, after which rescuers reached the area.

Teams from the NDRF immediately rushed to the spot for the rescue operation.

The stretch of the highway in the Western Ghats, where the accident occurred, has witnessed heavy rain for the last few days.

State minister Vinod Tawde tweeted, "30 people, including students of Konkan Krishi Vidyapeeth, were fatally injured after a bus falls down a mountain road on Mumbai-Goa highway near Raigad. Rescue operation underway. Instructed officials on prompt action." The number of dead was revised later to 33.

Prime Minister Narendra Modi tweeted his condolences. "Pained by the loss of lives due to a bus accident in Maharashtra's Raigad district. My condolences to those who lost their loved ones," PM Modi wrote.

"I'm sorry to hear about the terrible bus accident in Raigad, Maharashtra in which a large number of people have been killed and many others injured. I appeal to Congress party workers in the area to provide all possible assistance to the injured and families of those who have died," Congress president Rahul Gandhi tweeted.

Maharashtra government has announced an ex-gratia of Rs 4 lakh to the kin of those who died in the accident.