Barwani district collector Tejaswi Nayak, however, dismissed the reports of carrying the ‘sacred’ container in a filthy vehicle. 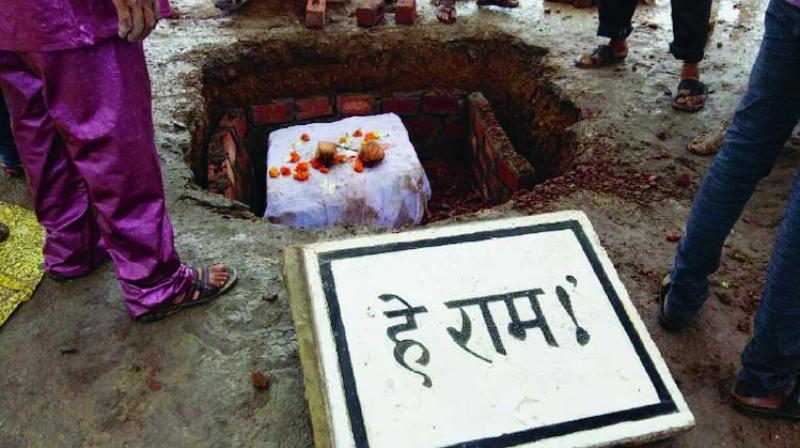 The sacred container where the ashes have been preserved. (Photo: Asian Age)

Bhopal: The move by the local administration in the district headquarters town of Barwani in Madhya Pradesh to shift the “sacred” container in which ashes of Mahatma Gandhi, his wife Kasturba and his secretary Mahadev Bhai Desai have been preserved, from Rajghat on the outskirt of the city in the early hours of Thursday faced stiff resistance by social activists and religious leaders.

Hundreds of people gathered at Rajghat, nearly 25 km from Barwani town, when news of digging up of the Gandhi memorial to retrieve the container for its installation at another place by the local administration spread in the locality.

The irate people, including social activist Medha Patkar and religious leader Swami Ramdev Maharaj, stopped the vehicle in which the container was being carried to another place for its safe keeping before being installed in a memorial being constructed in the nearby area, reports reaching here said.

“We protested the manner in which the administration used a JCB machine to remove the ‘sacred’ container and carry it in a mini-truck not cleaned properly. It is disrespect to the Father of nation”, Ms Patkar said.

Barwani district collector Tejaswi Nayak, however, dismissed the reports of carrying the ‘sacred’ container in a filthy vehicle.

The memorial was built at Rajghat in Barwani on February 12, 1965 by noted Gandhian Kasinath Trivedy.

Mr Nayak said the Gandhi memorial had to be shifted following a directive by supreme court to clear habitations in the areas affected by Sardar Sarovar Dam project by July 31 this year.

As many as 192 villages in two districts of Barwani and Khargone and a town of neighbouring district of Dhar would be affected by the project.

All the gates of the dam, height of which has been raised to 138 meter, are likely to be closed on July 31.