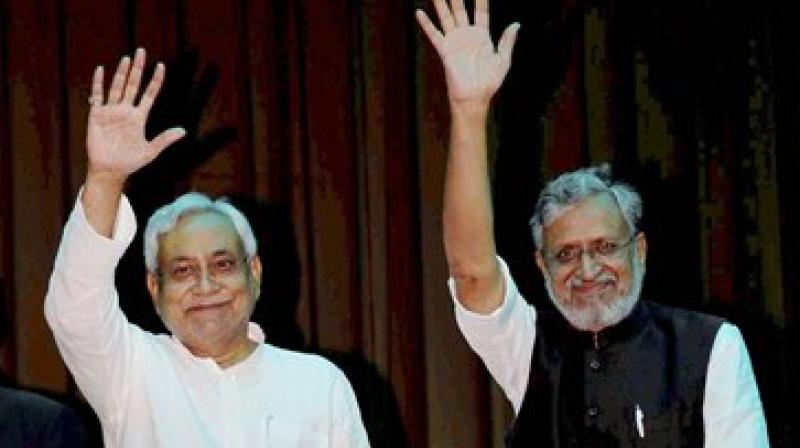 Nitish Kumar and Shushil Kumar Modi wave at gathering after they were sworn-in as Bihar Chief Minister and Dy Chief Minister respectively, at a ceremony in Patna. (Photo: PTI)

Patna: JD(U) chief Nitish Kumar who took over as chief minister of Bihar once again on Thursday after the resignation drama on Wednesday night will face a floor test on Friday. With the support of 132 MLAs in the House of 243, the floor test appears to be a mere formality. While Mr Kumar returned home to the NDA, senior state BJP leader Sushil Modi returned to his former position as deputy chief minister of  the state.

Taking over as the chief minister, Mr Kumar indicated that he was ready to share power at the Centre. Prime Minister Narendra Modi, is expected to go in for a major Cabinet reshuffle after the end of the Monsoon Session of Parliament and is likely to accomodate two JD(U) ministers in the Union Cabinet.

After the JD(U) and the BJP staked claim, governor Keshari Nath Tripathi asked Mr Kumar to prove his strength in a floor test at 11 am on Friday. 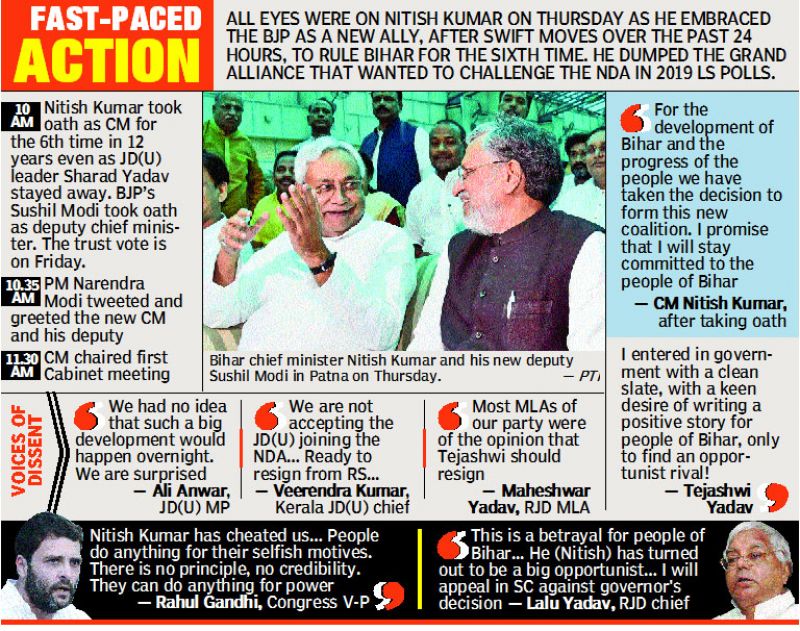 In the 243-member Bihar Assembly, the new NDA alliance claimed to have 132 MLAs — 71 of JD(U), 53 from BJP, two from RLSP, two from LJP, one from HAM and three independents. With this they will comfortably sail over the magic figure of 122. As for the Opposition, the RJD has 80 MLAs, Congress 27 and the CPI-ML has three.

While Mr Kumar resumed his chief ministership, there were reports of rumblings in the JD(U), particularly among the faction led by Sharad Yadav. However, despite the apparent diffrences, majority of the JD(U) MLAs have rallied around Mr Kumar.

Mr Kumar, who was back at the helm of affairs in Bihar nearly 12 hours after he stepped down and broke ranks with his allies — RJD and Congress, claimed that he “did everything to save the grand alliance”. Speaking to the media in Bihar, deputy chief minister Sushil Modi said, “Lalu Yadav and Rahul Gandhi had abused Bihar’s mandate.”

Former deputy chief minister and RJD leader Tejashwi Yadav threatened that his party would not let the House function on Friday. RJD chief Lalu Prasad Yadav claimed, “This is the end of Nitish Kumar.” Trying to put up a brave front, Tejashwi Yadav claimed that his party has “adequate strength to prove majority” and that some of JD (U) MLAs also “want to support the grand secular alliance”. Lalu Prasad Yadav who returned from Ranchi on Thursday evening chaired a meeting of legislators and party workers at his residence where it was decided to “oppose each and every move of Nitish Kumar and the BJP”. He also kept reiterating through the day that “JD(U) had locked up its MLAs”.

Sources revealed that the BJP and Mr Kumar’s camp rushed ahead with the move to form the government mainly to prevent resentnment among the JD(U) workers. Secondly, the BJP along with Mr Kumar moved with breakneck speed to block the RJD from influencing the JD(U) MLAs.