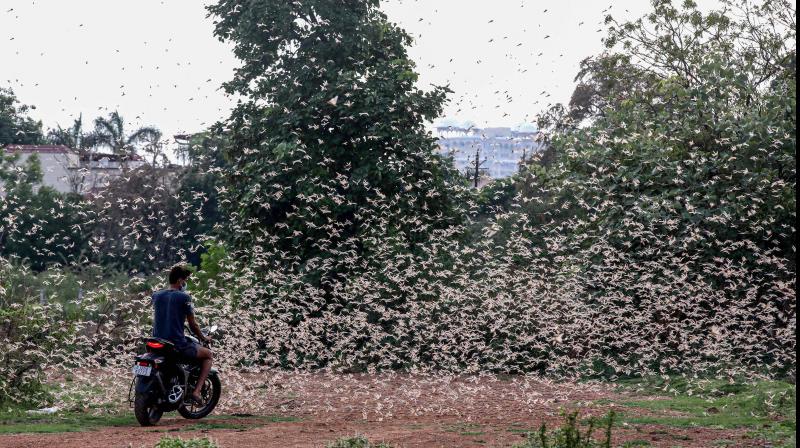 Delhi government issued an advisory to contain and control the menace of desert locust. (PTI Photo)

New Delhi: As swarms of locusts descended on Gurgaon and some border areas of the national capital on Saturday, the Delhi government issued an advisory to contain and control the menace of desert locusts. The Delhi government put all districts on high alert and asked district magistrates to coordinate with the fire department for spraying of pesticides and insecticides to prevent a possible attack of crop-destroying locusts.

Though there were no reports of any damage to crops or vegetation in Gurugram, at many places residents kept their windows closed to prevent the insects from entering homes. Some reports said that the swarm was 8 km long and 5 km wide.

The Delhi Air Traffic Control (ATC) directed pilots of all airlines to take necessary precautions during landing and take-off of aircraft in view of locust swarms seen near the airport in areas along Gurugram-Dwarka Expressway, and an advisory issued by the Delhi development commissioner said that residents can distract the locusts by making high-decibel sound through beating of drums, utensils, playing high-volume music, bursting crackers, and burning neem leaves.

The advisory asked people to stay doors, keep windows closed and cover outdoor plants with plastic sheets.  Earlier in the day, a huge swarm of locusts reached Gurugram via Jhajjahr covering the skyline of the millennium city and prompting officials to take necessary actions to ward off the threat.

Alarmed at the invasion by locusts, which settled on trees, rooftops and plants, many residents of Gurugram shared videos of the insects’ high-rise perches.