Politicians to celebrities come out to protests against lynching of Junaid. 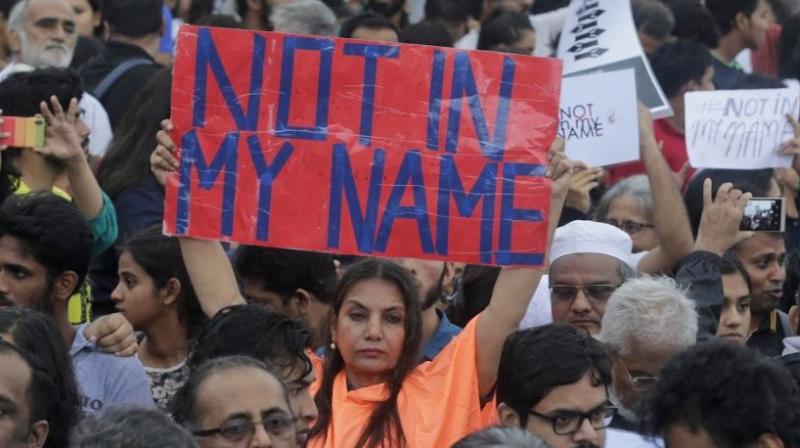 New Delhi: Dear Ma, I am home. You wanted me to buy new clothes in Delhi, but fate has landed me in heaven, where you don't have marauding mobs. I am home. Yours, Junaid.

There was not a dry eye at Delhi's Jantar Mantar when 22 year old Mohammed Asaruddin read out from what he called his brother Junaid's "letter to his mother from heaven", at a citizens' protest in the national capital on Wednesday.

Asaruddin's voice quivered as he read out the lines in Hindi from a makeshift dais, set against the backdrop of a "lynch map of India", highlighting the places where people had been lynched in the country since 2015.

The letter, he said, had been penned by a journalist friend.

"Even I was called a terrorist in college. This issue is of identity and we have reached a point where we are having to conceal skull caps and other symbols that define Islam," Asaruddin said.

Hundreds of people from Delhi joined the protest, called "Not In My Name", held six days after the 16-year-old Junaid was killed by a mob on board a Mathura-bound train.

Simultaneous protests were held in several other cities, and are also slated to be held elsewhere in the world, the organisers said.

Among the protesters in Delhi were ordinary citizens, as well as leaders from the Congress, JD(U), AAP and the CPI.

Students and artistes voiced their resistance against what the organisers called a "climate of fear" in the country through poetry, plays, songs and posters which carried messages such as "Not In My Name, Not In Anyone's name" and "Muslim Lives matter, All lives matter".

Singer Rabbi Shergill was also there, and was among the performers.

"We are outraged at the systematic violence. The state has done nothing; there has been a deafening silence from the powers that be," said filmmaker Saba Dewan, whose Facebook post last week triggered an outpouring of solidarity from across the country - and elsewhere - culminating in spontaneous countrywide demonstrations.

Congress chief spokesperson Surjewala said the "recurrence of mob lynchings" showed the "intent" of the BJP-led government at the Centre.

"The prime minister should speak out. If the government is competent enough then it should punish the perpetrators.

Instead it is protecting them by staying mute," Surjewala said.

A few film stars - including Kalki Koechlin and Konkona Sensharma - attended the meeting in Mumbai, braving heavy rains. An ailing Girish Karnad was at the Bangalore protest, with medical pipes attached to his nostrils.

Among the many students in the protest meet in Delhi was 25-year-old Vishnu.

"I am against mob lynchings, whether they are in Haryana or Kashmir. Incidents like these will destroy the secular fabric of our country. Such protests help build solidarities," he said.