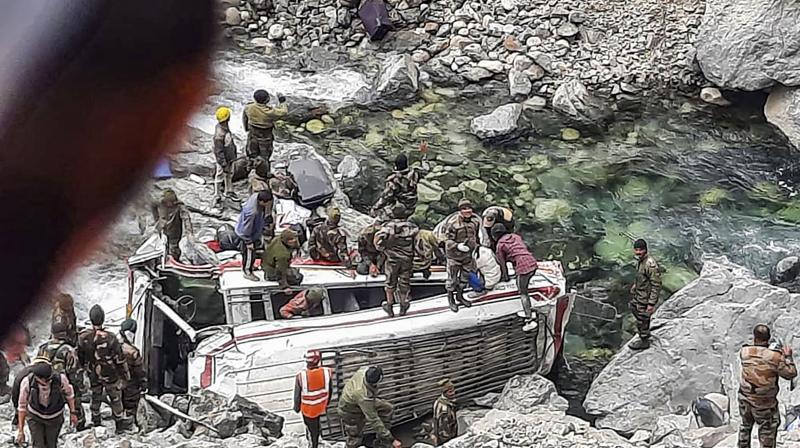 Indian Army personnel gather at the site after a vehicle carrying 26 jawans fell in the Shyok river, at the Turtuk area in Ladakh. At least 7 jawans were killed while 19 others sustained injuries in the accident, according to officials. (PTI)

Srinagar/New Delhi: In a tragic accident, seven Army jawans were killed and 19 others injured on Friday when a vehicle carrying 26 soldiers skidded off the road and fell around 60 feet into the Shyok river in the Turtuk sector, Ladakh.

The Army sources said that the soldiers were moving from a transit camp in Partapur to a forward location in sub-sector Hanif in the Turtuk forward area, which is sandwiched between the Karakoram Range and the Himalayan mountains in Ladakh.

"A party of 26 soldiers was moving from the transit camp to a forward location. At around 9 am, some 25km from Thoise, the vehicle skidded off the road and fell into the Shyok river," said a senior Army official.

All the passengers travelling in the ill-fated vehicle were injured in the mishap, seven of them fatally, said the sources. The condition of some of the injured is stated to be critical. The Army launched a relief and rescue operation immediately after the accident.

According to police officials, the vehicle lost control, skidded off the road and fell to a depth of around 50–60 feet.

The injured were being treated at the 403 Field Hospital at Partapur. However, hours later, the seriously injured were airlifted to Chandimandir Command Hospital of Western Command, near Panchkula in Haryana, said the Army sources, adding that all "efforts are underway to ensure that the best medical care is provided to the injured."

President Ram Nath Kovind, Vice President M Venkaiah Naidu and Prime Minister Narendra Modi, along with leaders of several political parties expressed their grief at the accident and hoped for a speedy recovery of the injured.