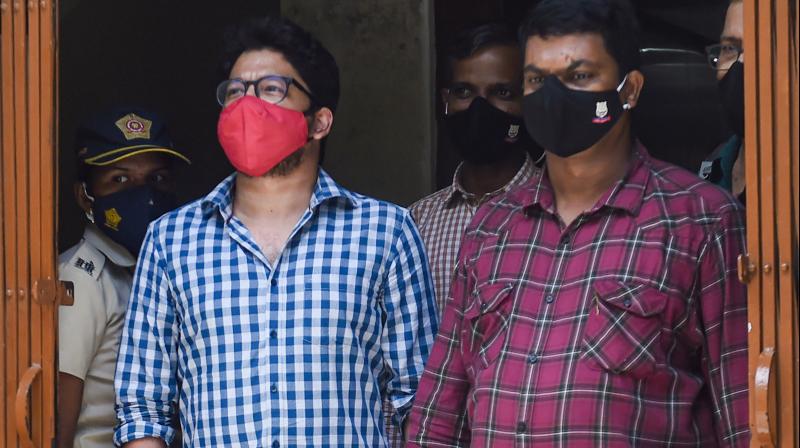 Late Sushant Singh Rajput's flatmate Siddharth Pithani (L) after being arrested by the Narcotics Control Bureau (NCB) in the drugs case linked to the Bollywood actor's death, in Mumbai, Friday, May 28, 2021. (PTI Photo)

HYDERABAD: The suicide by actor Sushant Singh Rajput has come to limelight again with the arrest of Siddharth Pithani, late Sushant’s housemate, in Hyderabad on Friday. A team from Mumbai’s Narcotics Control Bureau (NCB) took Pithani into custody from his house in Kushaiguda near ECIL.

The arrest by the Central agency comes almost two weeks ahead of the late actor’s first death anniversary. The Bollywood actor was found dead at his residence on June 14, 2020.

A team led by NCB's zonal director Sameer Wankhede had launched a manhunt for Pithani and tracked him down in Hyderabad. Officials, who nabbed Pithani with assistance from the bureau’s sub zonal unit here, have already filed a 12,000-page chargesheet against 33 accused in the case including Rhea Chakraborthy and her brother Showik Chakraborthy in March 2020. Rhea, girlfriend of late Sushant, is currently out on bail.

Kushaiguda ACP K. Siva Kumar said local police had not been informed prior to the arrest. According to sources, Pithani has been presented before the Killa Court in Mumbai for further custody. He will be in NCB’s custody for five days till June 2.

Officials of the bureau said despite repeated summons, Pithani did not appear before them for questioning. “We have issued notices to him but he refused to turn up at the NCB office and remained absconding. As Pithani's alleged role in drug procurement came to light, notices under the Narcotic Drugs and Psychotropic Substances (NDPS) Act were issued to him earlier, asking him to join the investigation, but he did not respond,” the NCB official said.

Pithani was trying to make a career in Bollywood and had been staying for almost a year with Rajput, before the latter allegedly committed suicide.

Pithani had been interrogated several times by both the Mumbai Police and CBI to get more clarity on the death of the actor after allegations of foul play had emerged. Reportedly, the chargesheet also contained statements of 200 witnesses and explained how narcotic substances were procured and distributed across Mumbai.

As soon as the news of Pithani's arrest broke, Twitter started flooding with reactions. Netizens took a dig at Jimmy Wales, Wikipedia founder, asking him to change the cause of SSR's death from "suicide by hanging" to "murdered".