Delhi court has reserved for June 5 its order on whether to summon Shashi Tharoor as an accused in Sunanda's death case. 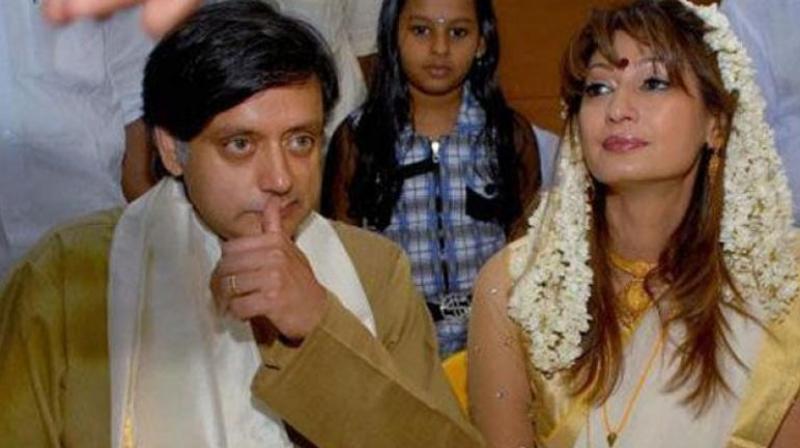 The couple's domestic servant, Narayan Singh, has also been named one of the key witnesses in the case. (Photo: File/PTI)

New Delhi: A Delhi court on Monday reserved for June 5 its order on whether to summon Congress leader Shashi Tharoor as an accused in the Sunanda Pushkar death case.

Additional Chief Metropolitan Magistrate Samar Vishal said he would pass the order after the counsel for prosecution said there was enough evidence to summon Tharoor.

The Delhi Police had on May 14 accused Tharoor of abetting Pushkar's suicide and told the court that he should be summoned as an accused in the four-and-half year-old case. The police also claimed that there was sufficient evidence against him.

In a nearly 3,000-page charge sheet, the Delhi police has explained why the death case is a case of abetment to suicide and cruelty.

Quoting the chargesheet, prosecution on Monday told the court, "Her statements on social media can be treated as dying declaration. Sunanda's death is due to poisoning."

The chargesheet has named Tharoor as the only accused while also alleging that he had subjected his wife to cruelty and had urged the court to summon the Lok Sabha MP from Thiruvananthapuram.

The couple's domestic servant, Narayan Singh, has also been named one of the key witnesses in the case.

The 51-year-old was found dead at her suite in Leela Hotel in the national capital on the night of January 17, 2014, days after she publicly accused her husband of having an affair with a Pakistani journalist.

The Congress leader has been charged under sections 498 A (husband or his relative subjecting a woman to cruelty) and 306 (abetment of suicide) of the Indian Penal Code. Under section 498A, the maximum punishment is up to three years of imprisonment, while jail term up to 10 years is prescribed under section 306.

An FIR was registered by Delhi Police on January 1, 2015 against unknown persons under IPC section 302 (murder).

According to prosecution sources, the charge sheet has mentioned that Pushkar was allegedly subjected to mental as well as physical cruelty.

Tharoor has not been arrested in the case.