India   All India  28 May 2018  How a Mumbai couple is helping change the world
India, All India

How a Mumbai couple is helping change the world 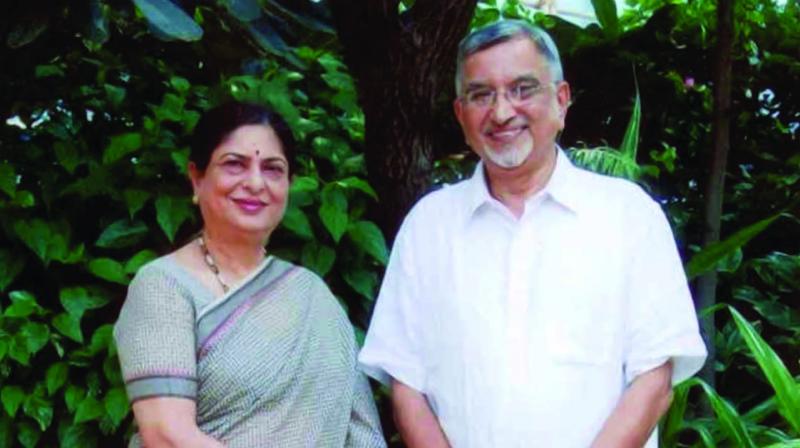 Kishor Kher and his wife Mrinalini, founders of Yuva Parivartan

Historians will tell you that a burst of creativity occurs when we start believing that the search for solutions to complex problems has come to an end. This explosion is fate’s way of reminding us that there is always something just over the curve of innovation.

As the country continues to face mounting challenges, social entrepreneurs are pairing their ingenuity and knowledge with their passion for bringing lasting solutions to society to create a sustainable and more equitable world.

Unemployment rates in India continue to rise, with youth unemployment registering the greatest increase. The unemployment rate among youth is almost 13 per cent (4.9 per cent overall), making unemployment one of the most challenging issues. Several civil society players are supplementing their efforts to address the problem, including an enterprising couple from Mumbai, Kishor Kher and his wife Mrinalini, founders of Yuva Parivartan (YP). The couple is working with school and college dropouts, in both villages and urban slums, to train them in vocational skills, thus enabling them to gain employment. However, the Khers’ impact is not limited to the youth they are training. In fact, in the process of doing so, they are nurturing grassroots social entrepreneurship so that these barefoot professionals take control of their own lives and steer their path out of poverty and hopelessness.

YP was started by the couple as they wanted to establish an exclusive organisation that focused on helping the youth attain the skills required to gain employment, thus making sure their futures were secure. The movement was formally launched in February 2003 by former President A.P.J. Abdul Kalam.

However, the Khers have a long history of volunteerism in their blood. In 1928, Kishor Kher’s grandfather, B.G. Kher, the first Premier of the Bombay Province formed a voluntary group called the Kherwadi Social Welfare Association aimed to address the appalling living conditions of families in what is now Bandra East.

In the early ’90s, Kishor’s social chromosomes fired his imagination to do something useful. That vision had been years in the making and when his own enterprising wife Mrinalini, herself finely honed in the asocial mould and an academically trained sociologist, nudged him to follow his heart. Kishor, an alumnus of IIM Ahmedabad, turned his back on a well-paying corporate job to pursue his passion: empowering the youth.

A search for real-world solutions is an unending quest for the Khers and their endeavour has touched the lives of hundreds of people. YP has helped trained over seven lakh people and aims to create livelihoods for millions more by covering about 4,000 villages every year. Generations of benefactors in the past believe that social service either required only saintly virtues or financial means. However, modern social innovation and entrepreneurship requires the devotion of people like the Khers who have a combination of businesses acumen and social spirit.

Kishor’s corporate stint and his family’s social outlook marked him out as an ideal candidate for the role. It was doubled up by the rare organisational skills of Mrinalini who is the now backbone of the whole administrative apparatus. She is a thoughtful campaigner who works methodically to drive change without seeking the limelight. Both Khers are practical people who wear their values on their sleeves.

YP has played a prime role in shaping the ecosystem for skill development and has been an active supporting associate of the National Skill Development Corporation (NSDC).

The philosophy and economics behind skill development at the organisation are driven by four critical factors. First, they believe investment for skilling needs to be comprehensive, covering not only the training itself but also screening, matching and mentoring. Second, programmes need to have measurable outcomes for the person seeking a job that will encourage other young people to get involved. Third, there should be a close link between skill development and business profitability that will stimulate employers to hire skilled people. Lastly, but most importantly, society should shift the measure for the efficacy of skilling from cost to a broader metric which measures social return on this investment.

In India, professional and vocational training for traditional skills like carpentry and weaving are usually acquired within the family milieu, which in turn restricts social mobility and access to modern technology. YP aims to change this and aims to hone such skills through modern methods. The organisation has its own centres called LDCs — Livelihood Development Centres — across various cities throughout the country where they have a classroom set up. They also organise various MLDCs — Mobile Livelihood Development Centres — for rural areas where they temporarily conduct their camps for a month. The teaching model incorporates innovative teaching methods along with exercises, role plays and media tools, thereby ensuring high rates of youth engagement.

YP conducts 54 approved courses in 17 sectors. It also designs and develops industry relevant courses within the National Skill Qualification Framework (NSQF), best suited for industry-relevant employment. To ensure quality, YP keeps abreast with best practices that include modern teaching aids and stringent assessment assurance checks that include centralised examination and certification. In addition to this, the examination and certification process functions on the standardised guidelines laid down by Quality Control of India (QCI), International Organisation for Standardisation and National Skill Development Corporation (NSDC).

Most importantly, on-the-job training for members of the organisation is offered in partnership with the industry. Some of its industry partners include Blue Star for air conditioning, Larsen & Toubro for masonry and Marriot, Taj, Oberoi and Hyatt for catering. YP has slowly grown into one of India’s largest NGOs in skill development and livelihood generation and won countless awards for social entrepreneurship.

Apart from endowing physical skills, YP tries to bring about attitudinal changes so that the youth are motivated and become local change-makers who transform their surrounding ecosystem. It does this via Sochka Parivartan (SKP), a behavioural module, which is central to all training programmes. SKP is a proprietary programme for attitudinal change and imparting life skills such as decision-making, time management, money management, values and perception, and health and hygiene.

YP’s impact assessment programme aims at evaluating and measuring the quantitative and qualitative impact of programmes across multiple geographies and the learnings are incorporated in the centralised modules to improve their quality and have better outcomes. Having created a scalable and replicable model, YP is helping smaller and like-minded NGOs build a similar model.

Currently, the biggest challenge that the organisation faces is to get the students continue their jobs after placement, as students often leave jobs only months after joining due to low motivation levels. The organisation has been creatively designing strategies to make its programme more enriching and improve retention rates.

It has been a long, arduous trek for the Khers whose small sapling has grown into a banyan tree. They have encountered several challenges, but their determination has sustained them. It doesn’t require a genius to change the storyline. We have the tools, but we need to muster the will the way the Khers have done.