India   All India  28 May 2018  AIADMK expells Hari Prabhakaran for calling journalists ‘dogs’ in his tweet
India, All India

AIADMK's IT wing member disrespected journalists who were reporting from Tuticorin where anti-Sterlite protests took place. 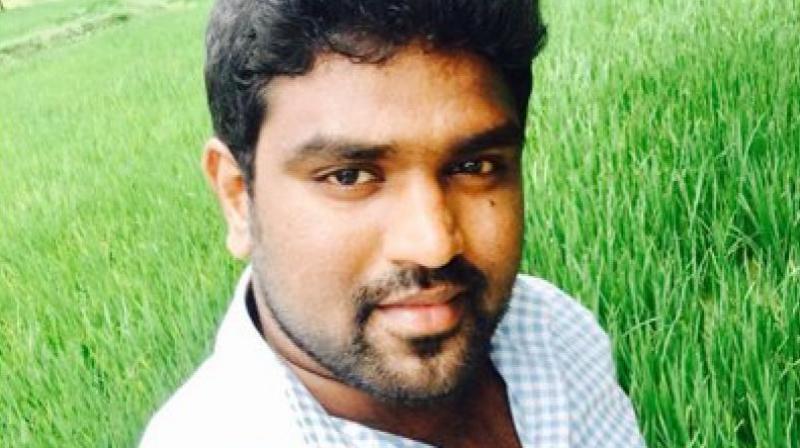 ‘Street dogs who shout for biscuits will be tied on the gate rather than allowing them inside’, Hari Prabhakaran tweeted. (Photo: Twitter/@Hariadmk)

Chennai: The All India Anna Dravida Munnetra Kazhagam (AIADMK) on Monday expelled its IT wing member, Hari Prabhakaran, from all party posts hours after he posted a tweet disrespecting journalists.

According to reports, the AIADMK released a statement saying the disciplinary action taken towards Prabhakaran is for acting against the interest of the party and bringing a bad name to it.

In his shocking tweet, Hari Prabhakaran has allegedly compared journalists, who were reporting from Tuticorin where anti-Sterlite protests took place, to street dogs.

His tweet, which came in response to journalists criticising the authorities in Tuticorin for not allowing them to accompany Tamil Nadu deputy chief minister O Panneerselvam on his hospital visits to meet those injured in police firing.

‘Street dogs who shout for biscuits will be tied on the gate rather than allowing them inside’, Hari Prabhakaran tweeted. 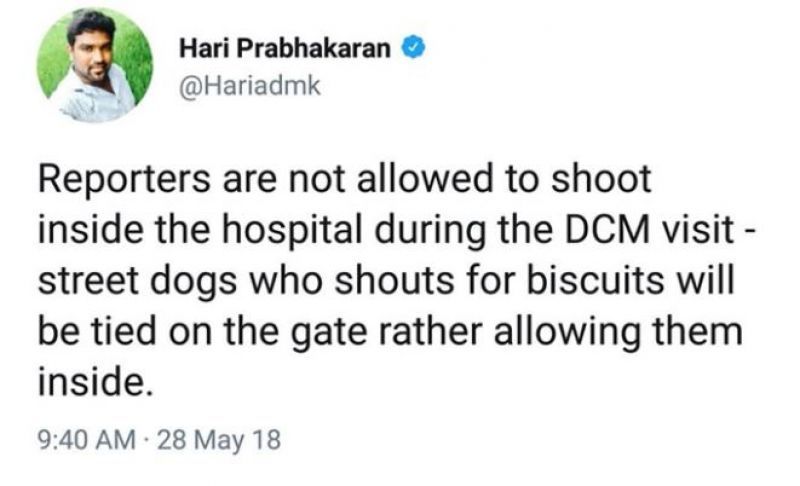 However, he later deleted the tweet and tendered an apology.

All opinions expressed by me are personal and it is not official party view. I'm not authorised to express party views. I heard few people got hurt due to one of my tweet this morning .I don't have any animosity towards any group of people. My apologies to those who r hurt.

Six days after the violence and police firing in Tamil Nadu's Tuticorin -- in which 13 protesters demanding closure of the Sterlite copper smelting plant died -Panneerselvam on Monday visited the injured people and their families at a local hospital in Tuticorin.

The media was not allowed in after the ruling AIADMK faced public embarrassment on Sunday when mother of one of the survivors confronted a visiting minister and asked him why the government cannot announce the closure of Sterlite copper plant.