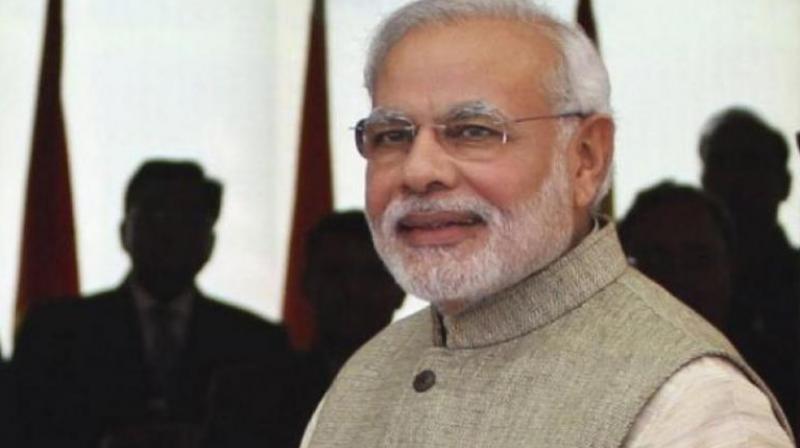 New Delhi: Prime Minister Narendra Modi on Sunday congratulated all the victorious students who successfully passed in the Senior Secondary Examinations conducted by the Central Board of Secondary Education (CBSE).

Modi took to twitter to express his happiness and also congratulated the students.

Congratulations to all my young friends who have successfully passed the CBSE Class XII exams & best wishes for future endeavours.

Earlier in the day, Union Minister of Human Resource Development Prakash Javadekar also congratulated the candidates for their successful results, lauding them for their hard work and determination to achieve their goal.

"I spoke to the four frontrunners, Raksha Gopal, Bhumi Sawant, Mannat Luthra and Aditya Jain today. They expressed their passion to be an economist, a politician, an IAS officer and engineer respectively. It is good to see such palpable passion at this age, and such aspirants will surely add to the country's growth," said Javadekar said.

Raksha Gopal of Amity International School, Noida has topped the CBSE Class XII 2017 results with 99.6 percent. She is an arts student.

Overall pass percentage is 82 percent, while it was 83 percent last year. Around 11 lakh students have appeared for the CBSE Class 12 exam.

The result has been announced after much delay due to the controversy with the Marks Moderation Policy.

Earlier on Friday, the CBSE decided to not to move the Supreme Court to challenge the Delhi High Court instructions stating that evaluation for the class 10 and 12 board exams this year should be done as per the grace marks policy.

Aiming to check high cut-offs in colleges, the CBSE had scrapped the moderation policy under which grace marks are given to the students in exams for difficult questions.

Under the moderation policy, students are awarded up to 15 percent extra marks in certain papers if the questions are deemed to be difficult.