AAP sources said expulsion of Mishra would give him a chance to join another party or form a separate group in the Delhi Legislative. 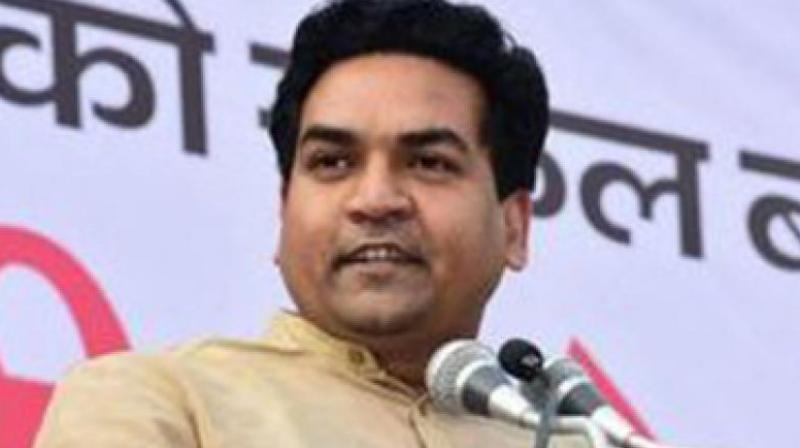 Mishra, once a close confidant of Chief Minister Arvind Kejriwal, had levelled corruption charges against him and other AAP leaders, which created ripples in the city politics and dented the image of the party.(Photo: PTI)

New Delhi: Not withstanding his persistent attacks on AAP leadership, sacked Delhi minister Kapil Mishra is unlikely to face expulsion from the party.

Aam Aadmi Party (AAP) sources said expulsion of the rebel MLA would give him a chance to join another party or form a separate group in the Delhi Legislative Assembly, which the party wants to avoid though it has a brute majority in the House.

Mishra, once a close confidant of Chief Minister Arvind Kejriwal, had levelled corruption charges against him and other AAP leaders, which created ripples in the city politics and dented the image of the party.

The AAP has denied the ‘wild’ charges levelled by Mishra and has put him under suspension.

None of these MLAs have been expelled from the party.

Of these five, all except Okhla MLA Amanatullah have rebelled against the party leadership since its resounding victory in the 2015 Delhi Assembly polls.

Party's Timarpur MLA Pankaj Pushkar, known to be close to expelled AAP leader and Swaraj India President Yogendra Yadav, has also spoken out against the leadership, but has, so far, escaped action, except for being excluded from party events.

"We have suspended the MLAs for indiscipline and gave a clear message to people as well as partymen that these legislators are not with us.

"By their explusion, we don't want to give them a chance to join any other party or form a separate group in the Delhi Legislative Assembly,” said a senior party leader.

They have won on AAP ticket. They are free to resign and contest again, said another senior party leader, citing an example of AAP's Bawana MLA Ved Prakash who quit to join the BJP, ahead of the MCD polls last month.

Twenty party MLAs are also facing Office of Profit proceedings before the Election Commission and an adverse result would hit the party hard.

Interestingly, although suspended, the MLAs have to abide by the party whip in the Delhi Legislative Assembly or face disqualification as an MLA.

For instance, despite Pushkar's severe criticism against the Delhi government's education policy last year, he had voted in its favour in the Delhi Legislative Assembly.

The party has also used the same strategy to deal with its rebel MPs. Of the four party MPs---all from Punjab, two lawmakers HS Khalsa and Dharamvira Gandhi were suspended from the party. Though they are known to be close to Yogendra

Yadav, the party chose to suspend them only.'

This is likely to prove critical to the party during Presidential vote. The party currently has 65 MLAs in the 70-member House in Delhi, 20 MLAs in Punjab and four Lok Sabha MPs.