India   All India  28 May 2017  J&K: Amid heavy curfew, youngsters come forth to give Army entrance exam
India, All India

J&K: Amid heavy curfew, youngsters come forth to give Army entrance exam

The written examination was conducted after due registration, physical tests and medical tests. 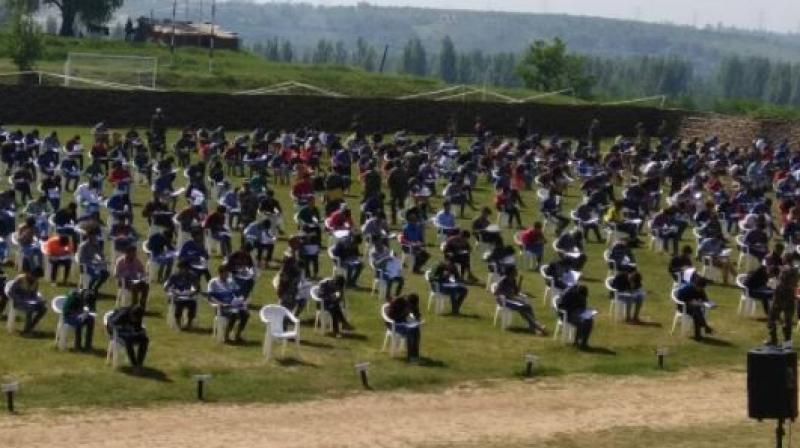 Srinagar: Amid the prevailing unrest in the Kashmir Valley, the Common Entrance Written Examination for the selection of Indian Army Junior Commissioned Officers and Other Ranks was successfully held in Srinagar and Pattan on Sunday.

The written examination was conducted after due registration, physical tests and medical tests.

In spite of the two days curfew imposed in the Valley, out of 815 candidates, 799 appeared for the test.

Earlier in the day, curfew was announced following the killing of Hijbul Mujahideen commander Sabzar Ahmed Bhat in an encounter with security forces in Jammu and Kashmir's Tral area on Saturday.

Unrest stirred again in the Valley after Bhat's killing, as locals took to the streets and clashed with the security forces to express their anger over the killings.

The curfew has been announced in parts of Srinagar falling under the jurisdiction of eight police stations including Kralkhud, Khanyar, Rainawari, Safa kadal, Maharaj Gunj, Maisuma, Batamaloo and Nowhatta.

The district administrations announced strict restrictions which will be continued till the further orders.

Yesterday, the mobile internet services were also suspended a day after authorities lifted a month-long ban on the social media.

The outgoing calls on prepaid mobiles were also broke out after protests in several parts of the Valley.

The death of Sabzar Bhat, who succeeded Burhan Wani has triggered protests, shutdown and curfew like situation.

The Tral operation was a coordinated effort of the Rashtriya Rifles (RR), the JKP, Special Operation Group (SOG) and the Central Reserve Police Force (CRPF).

On Saturday, the Indian Army confirmed killing 10 heavily armed intruders and terrorists in last 24 hours. It said that relentless operations by security forces have defeated desperate attempts by Pakistan and Pakistan sponsored agents to spread terror in the Jammu and Kashmir in the run up to the holy month of Ramazan.