India   All India  28 May 2017  India's 1st under-river metro tunnel to be completed next week
India, All India

India's 1st under-river metro tunnel to be completed next week

The under-river tunnel is a crucial link for the Railway's 16.6-km long East-West Metro project in Kolkata. 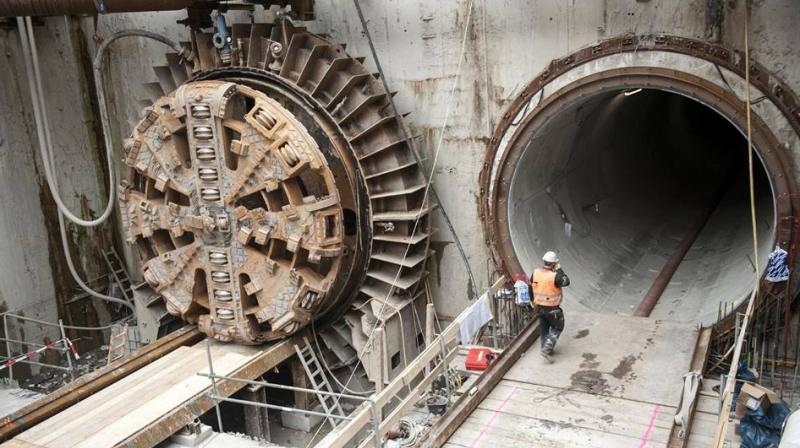 New Delhi: The tunnelling work under the Hooghly river, the first such under-river project in the country, to provide metro connectivity between Howrah and Kolkata is slated to be completed next week.

The under-river tunnel is a crucial link for the Railway's 16.6-km long East-West Metro project in Kolkata.

The 520-metre twin tunnel, one east-bound and the other west-bound, is built 30 metre below the riverbed. Commuters between Howrah and Mahakaran metro stations will be under the river for only about a minute when the metro train will pass through the tunnel at a speed of 80 km per hour.

The under-river tunnel is being built at an expense of Rs 60 cr while the total cost of the East-West Metro project is estimated at around Rs 9,000 crore.

The tunneling work started in April last year and likely to be completed in the river section shortly, a senior Railway ministry official said.

The East-West Metro is scheduled to be operational by August, 2019.

The internal diametre of each tunnel is 5.55 metre and the thickness of the wall is 275 millimetre. The distance between the two tunnels is 16.1 metre.

There will be walkways in the tunnels for evacuation of passengers in case of emergency, the official said, adding it was a challenging task to dig a tunnel under the river.

For the Railways, besides the tunnel under the Hooghly river, drilling work is going on for the seven-km-long undersea route of the Mumbai-Ahmedabad rail corridor to ascertain soil condition for India's first bullet train path.

Passengers will get the thrill of travelling under the sea at a maximum speed of 350-km-per-hour, another first in the country, near Thane in the upcoming high-speed train project connecting the two metropolis.