Besides the maritime pact, three other agreements were also signed after talks between the two leaders. 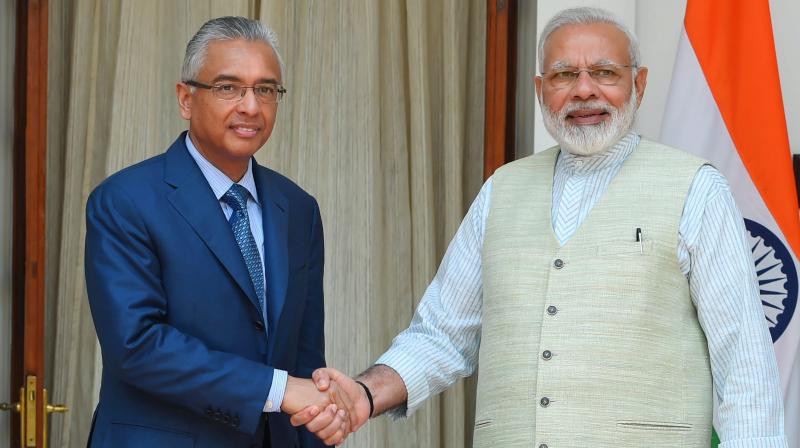 New Delhi: India on Saturday announced a $500 million line of credit to Mauritius, and the two nations also inked a pact for cooperation in maritime security in the Indian Ocean region.

In a statement issued later, Mr Modi said he and Mr Jugnauth agreed that effective management of conventional and non-conventional threats in the Indian Ocean is essential to pursue economic opportunities and provide security to the people of both the countries.

“We have to keep up our vigil against piracy that impacts trade and tourism, trafficking of drugs and humans, illegal fishing, and other forms of illegal exploitation of marine resources,” the Prime Minister said.

The bilateral maritime accord will strengthen cooperation and capacities, he said, noting that the two sides also agreed to strengthen their wide-ranging cooperation in hydrography for a secure and peaceful maritime domain.

On his part, Mr Jugnauth said the two countries need to ensure that the sea lanes of communications are safe and secure and regular patrolling is conducted to combat illegal activities such as piracy, illegal fishing in the territorial waters and drug trafficking.

Besides the maritime pact, three other agreements were also signed after talks between the two leaders.

They were for setting up of a civil services college in Mauritius, one on cooperation in ocean research and the US dollar Credit Line Agreement between the SBM Mauritius Infrastructure Development Company and Export-Import Bank of India.

Mr Modi said the agreement on the line of credit to Mauritius was a good example of the strong and continuing commitment to the development of that country.

The two sides also decided to ramp up cooperation in a number of areas including trade and investment.

“India is proud to participate actively in the ongoing development activities in Mauritius,” the Prime Minister said, adding that emphasis was also given on cooperation in skill development during the talks.