PM Modi tells states: Covid-19 not over yet, give kids jabs swiftly 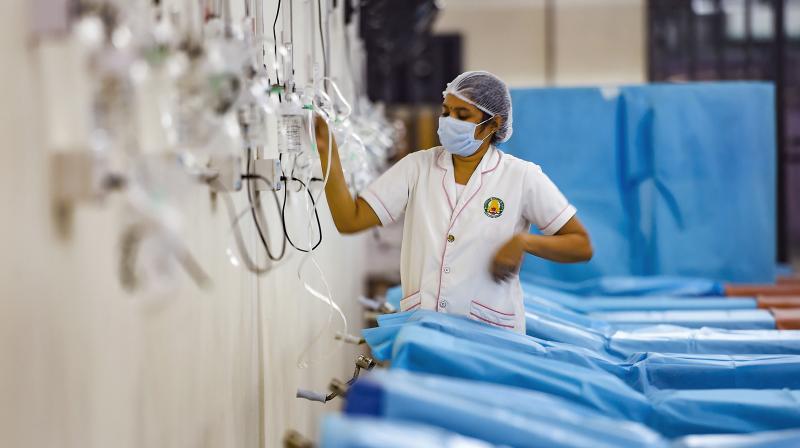 Mr Modi asked the states to ensure all the medical oxygen plants, including the hospital beds are made fully functional. (Representational Image/ PTI)

New Delhi: Prime Minister Narendra Modi urged all chief ministers on Wednesday to remain alert as “the threat of Covid-19 was not fully over.” During an interaction with the chief ministers on the emerging Covid-19 situation in the country, he also said that the government's priority was to vaccinate all eligible children at the earliest with special campaigns needed in schools.

Asserting that India has fought a long battle against Covid-19 in the spirit of cooperative federalism enshrined in the Constitution, PM lauded the chief ministers, officers and all corona warriors for their efforts. He asserted it was clear that the coronavirus challenge is not fully over yet. He said Omicron and its subvariants can create problems as was evident in case of many countries of Europe.

Mr Modi said India has been able to deal with the situation better than many countries. “Still, in the last two weeks, increasing cases in some of the states show that we need to stay alert.”

He highlighted that the twin strategy of bringing the cases under control and also allowing the economy to continue should remain the priority. “During the third wave, we have witnessed more than three lakh daily cases. Every state handled these cases well. They also allowed economic and social activity to continue.

This balance should be part of future strategy. Our scientists and experts are continuously monitoring the global situation. Based on their advice, we have to adopt a pre-emptive, proactive, and collective approach.”

The PM said that preventing the spread of the infection at the very beginning has been the government’s priority and it should remain the same even today. He specifically told the states that for early tracking of the variants the local administration should conduct 100 per cent RT PCR testing of all hospitalised patients with influenza like and severe acute respiratory like illnesses.

Mr Modi said, “Our priority is to stop the infections right at the beginning. We have to continue to make this our priority now. We have to effectively implement the test, track and treat strategy. It is very important that we do 100 per cent RT PCR testing on hospitalised patients with influenza-like illness and severe acute respiratory illness; all the positive cases should be sent for genome sequencing. By doing this, we will be able to detect the new variants.”

The PM emphasised that priority in the new phase of pandemic should be to vaccinate all the eligible child population – directing the states to implement special vaccination campaigns as children are returning to the schools after a long break.  “After a long break, the schools have reopened in our country. Some parents are worried about the increase in cases in some places. There are reports from some schools reporting children being tested positive for Covid-19… Our priority is to vaccinate all the eligible child population. For this, we have to run special drives in the schools. We have to create awareness among the parents and the teachers about the importance of vaccination,” he said.

Mr Modi asked the states to ensure all the medical oxygen plants, including the hospital beds are made fully functional. “We have talked about the up-gradation of health infrastructure. We have to ensure the up-gradation is completed quickly.

We are in a better position with respect to the availability of beds, ventilators, and the PSA oxygen plants. But we have to ensure that all of these facilities are fully functional. They have to be monitored and responsibility has to be fixed. If there are any gaps, it my request, that it should be verified at the top level. We also have to scale up our infrastructure and manpower in the medical colleges and district hospitals…” PM added.

The PM urged the states to promote Covid-19 appropriate behaviour at the social gatherings but added that at the same time it should be ensured that no panic is created among the public.

He also reiterated that the vaccination will remain the most effective shield against severe Covid-19. “Despite many geographical challenges, vaccines have reached the last mile. It is a matter of pride that 96 per cent of the adult population has received the first dose and 85 per cent of those above 15 years have received their first dose. The opinion of the experts is that vaccines are the biggest protection shield,” Mr Modi said.