India   All India  28 Apr 2021  Series of earthquakes jolt Assam and most of the Northeast
India, All India

Series of earthquakes jolt Assam and most of the Northeast

The impact was felt in almost the entire Northeastern region, parts of West Bengal, Bhutan and Bangladesh 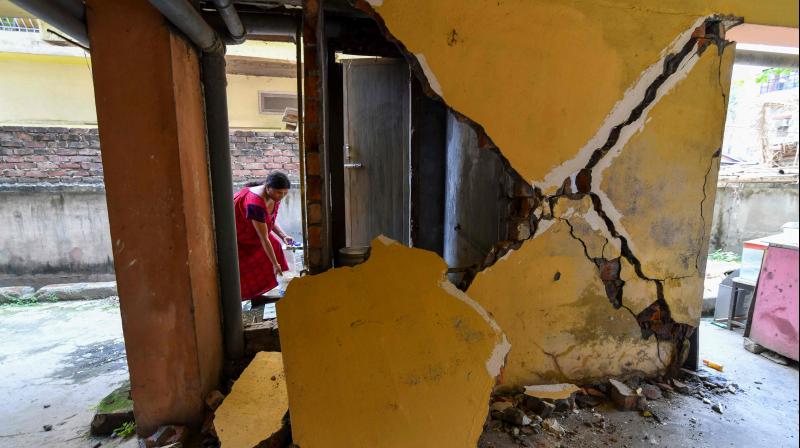 A woman collects water from a tap near a collapsed wall at an apartment building in Guwahati on April 28, 2021, after a strong earthquake hit Assam in northeastern India, damaging buildings, but there were no immediate reports of casualties. (AFP)

Guwahati/New Delhi: A series of earthquakes jolted Assam and most of the Northeast on Wednesday, causing extensive damage to buildings and forcing people to scamper out of their homes.

There were no immediate reports of deaths, but three people were injured as the first quake of 6.4 magnitude struck Tezpur, the headquarters of Sonitpur district in Assam, at 7.51 am, officials said.

The impact was felt in almost the entire Northeastern region, parts of West Bengal, Bhutan and Bangladesh.

There were reports of extensive damage to buildings and other structures from across Assam, mostly in the central and western towns of Tezpur, Nagaon, Guwahati, Mangaldoi, Dhekiajuli and Morigaon.

"We have received reports of three people getting injured in the earthquake. However, there is no death. We are still collecting reports from different districts and assessing the total damage to the properties. It will take some more time," Assam State Disaster Management Authority (ASDMA) CEO Gyanendra Tripathi told reporters.

Several roads in the region developed wide cracks, affecting traffic. Besides, in many areas fissures were seen in fields with water oozing out, officials said.

The National Centre for Seismology (NCS) said damage to buildings and structures was reported from areas within 100 km radius of the epicentre.

In Guwahati, the chief minister's block at the 'Janata Bhawan' complex, the state secretariat, witnessed some damage, sources said.

The luxury Taj Vivanta hotel in Guwahati also witnessed massive damage with several glass panes, ceilings and walls falling apart, but there was no injury to any employees or guests, hotel spokesperson Indranee Phukan told reporters.

A multi-storied building in Nagaon tilted on the adjacent structure, triggering panic.

Dozens of homes, apartment buildings and shopping malls across the state also developed cracks. Many vehicles were damaged after concrete blocks fell on them due to the jolts.

"The preliminary analysis shows that the events are located near to Kopili Fault closer to Himalayan Frontal Thrust (HFT)," the NCS said in a report.

The area is seismically very active and falls in the highest Seismic Hazard Zone V, associated with collisional tectonics where the Indian plate subducts beneath the Eurasian Plate, it said.

The historical and instrumentally recorded earthquake data reveals that the region is affected by moderate to large earthquakes, with the most prominent event among those being recorded is on July 29, 1960 when a magnitude 6 quake was reported, it added.

"Spoke to Assam CM Shri @sarbanandsonwal Ji regarding the earthquake in parts of the state. Assured all possible help from the Centre. I pray for the well-being of the people of Assam," the prime minister tweeted.

Congress leader Rahul Gandhi said he stood in solidarity with the people of Assam, and asked party workers to be at the forefront of rescue and relief efforts.

The chief minister urged everyone to stay alert and said that he is taking updates from all the districts.

In Shillong, the tremor woke up people and many ran outside their homes in panic.

Although there was no immediate report of any damage from Meghalaya, the tremor was one of the strongest in the last few years, an official said.

The last one of such intensity was in March-April 2016, he said.

"The timing of the earthquake saved a lot of lives. People were already awake when the earthquake hit, so they could run out in time. There would have been several casualties if this quake struck two-three hours early," a disaster management official in Guwahati said.

"However, there are concerns as COVID patients also ran out of some safe homes because of the quake. Also, people forgot to wear masks and there were small gatherings on the roads," he said.

In West Bengal, tremors were felt in Jalpaiguri, Alipurduar, Coochbehar and parts of Darjeeling district but no major damage was reported, local authorities said.

Tremors were also felt in Manipur, including state capital Imphal.

The tremors were also felt in large parts of Bangladesh, including capital Dhaka. However, there were no reports of any damage, according to local media reports.

Neighbouring Bhutan also reported jolts due to the earthquake, as per reports from Thimphu.