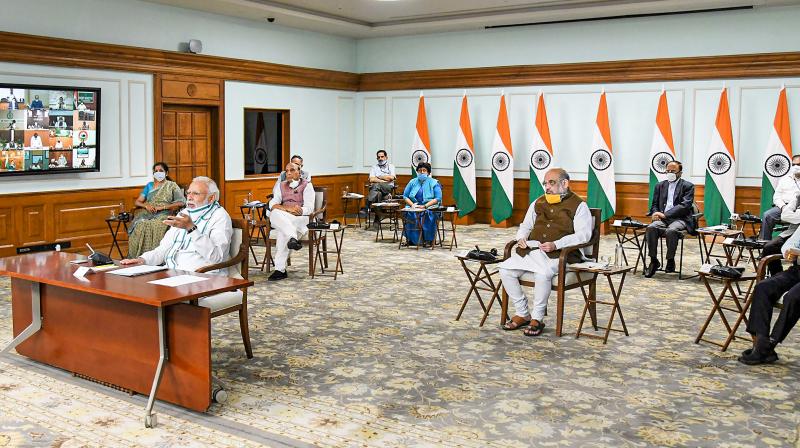 New Delhi: Even as several chief ministers suggested to the prime minister that the lockdown should continue after May 3 to check the spread of novel coronavirus, Narendra Modi indicated that restrictions would definitely continue in hotspots beyond this coming Sunday.

There was, however, no official word on how the lockdown would be lifted in other places after May 3, the last day of the second successive nationwide lockdown.

“Green zones will be opened, relaxations in sectors have been agreed to but the mindset of lockdown will continue. We should get people ready with new norms like social distancing,” Meghalaya chief minister Conrad Sangma said after the meeting and announced that the state will continue with the shutdown post May 3 with relaxations in Green Zones or non-Covid-19 affected districts.

On May 3, India will complete a 40-day nationwide lockdown that has been in place since March 25 to contain the coronavirus pandemic.

During the interaction with the prime minister through video-conferencing, which lasted for close to three hours to discuss strategies related to the lockdown, several chief ministers, led by Bihar’s Nitish Kumar, Chhattisgarh’s Bhupesh Baghel and Puducherry’s V. Narayanasamy, sought a policy for migrant labourers and their re-employment as well as providing GST compensation.

The Prime Minister reportedly told the chief ministers, “There is no need to worry on the economy front, our economy is good,” but there was no indication about announcing an economic package to combat the negative impact of the coronavirus pandemic on people and the country’s financial condition.

In what was Modi’s fourth interaction with chief ministers in the past one month, the Prime Minister spoke at length on precautions to be taken to stop the spread of the pandemic and reiterated the need for maintaining social distancing.
“Do gaz doori (six feet apart)” and masks would continue to be a way of life for times to come, the PM said.

Modi praised the efforts of the Rajasthan and Odisha governments in combating Covid-19 and directed chief ministers to work towards converting Red Zones (areas with major outbreak) into Orange Zones and thereafter into Green Zones. Gujarat’s Ahmedabad and Uttar Pradesh’s Agra have emerged as major Red Zones in the past few days among several other cities of the country.

Sources said that the Prime Minister did not respond to these aspects.
During the meeting, nine chief ministers aired their views.