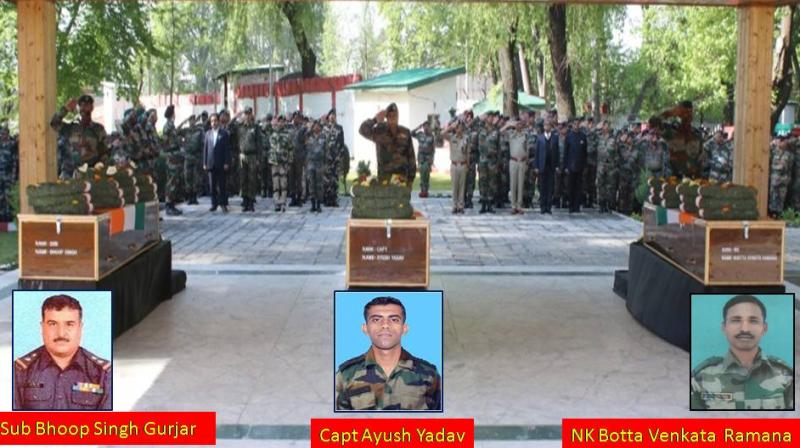 Srinagar: The Army on Friday paid glowing tribute with full military honours to Captain Ayush Yadav and two other soldiers who laid down their lives while fighting militants during a ‘fidayeen’ attack at their camp in Jammu and Kashmir’s frontier district of Kupwara on Thursday.

26-year-old Captain Yadav, the only son of a UP police inspector, was a native of Kanpur. Subedar Gurjar, 46, was a resident of Kherla Bujore village of Dausa district in Rajasthan and Naik Ramana, 38, that of Arivanipallam village in the Vizag district of Andhra Pradesh.

They were killed in a pre-dawn militant ‘fidayeen’ attack at the artillery headquarters of the 155 Field Regiment at Panzgam, about 80-km northwest of Srinagar, on Thursday.

Five other soldiers were injured whereas two militants were shot dead by Naik Rishi Kumar even after he was hit by a bullet in the head.

A third militant involved in the attack escaped and the Army has launched a massive search operation in the area to get him dead or alive, officials said.

Soon after the attack, protests by locals were held in nearby villages of Panzgam and Kralapora. The Army opened fire at the protesters who were demanding the corpses of slain militants, killing one person. Ten others were injured in the firing and during the clashes.

The Chinar Corps Commander Lt. Gen. JS Sandhu joined by the officials from civil Administration and other security forces, paid rich tributes to the slain soldiers in Friday’s ceremony, the defence spokesman said

"The young officer Captain Ayush Yadav defied his 25 years of age and had established himself amongst his comrades as a spirited and daring soldier. The 46-years-old martyr Subedar Bhoop Singh had joined the Army in 1992 and is proudly remembered by his comrades as a highly professional soldier and a true patriot. A true son of soil, Naik Botta Venkata Ramana, 38, had earned the respect of a warrior and was a friend to all," a statement issued by the Army said.

Their mortal remains were flown to their native places for last rites with full military honours, Col Kalia said.

He quoted Lt. Gen, Sandhu saying that that the Army stands in solidarity with the bereaved families and remains committed to their dignity and well being.