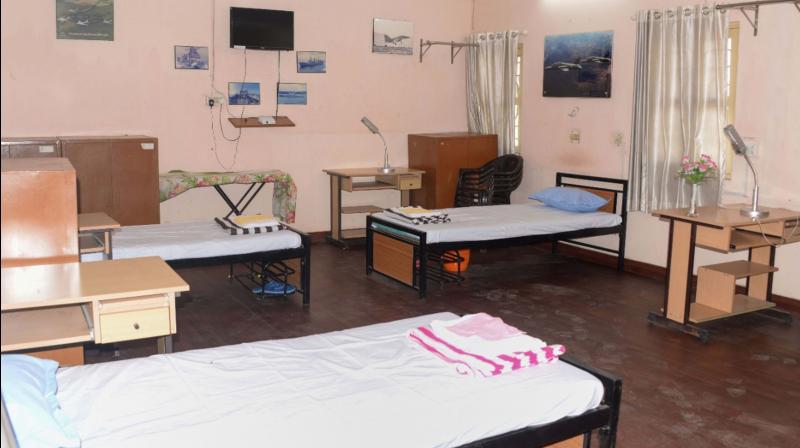 A glimpse into the interiors of quarantine facility run by the Southern Naval Command to combat COVID-19 in Kochi. (PTI)

Kochi: Resentment is mounting over British media reports that coronavirus-infected UK nationals undergoing treatment at the Ernakulam Government Medical College here are being put in “filthy and appalling” isolation wards.

The Kerala government has already rejected the British media reports and Ernakulam district collector S Suhas has made it clear that all COVID-19 patients in the medical college are being given good care and facilities.

According to the British media reports, a British woman alleged that her aged parents, who tested positive for the virus during their vacation to Kerala, are admitted in “unsanitary hospital isolation units infested with rat droppings and were without bedding, toilet paper, soap, towels and only had very basic food rations.”

Now, Rajesh Krishna, a UK-based Keralite journalist admitted in the medical college himself, has sent a letter to the British newspaper Guardian. In the letter, the UK journalist has criticised the way in which the Indian healthcare system is being portrayed.

“I found this an articulate attempt to draw attention to the irresponsibility and negligence of the UK government and their failure to effectively bring back Britons stranded in India following the coronavirus pandemic. At the same time, the article took me by surprise because of the way it defamed the Indian health system, despite all the acclamation it has garnered in the past several days,” he said in a Facebook post.

Rajesh Krishna was a passenger on the Emirates flight from which the 19 UK tourists were forcefully deboarded after they tested positive for the virus.

“As I was sitting right next to two of the British nationals I decided to cancel my trip and remained in self-quarantine to avoid chances of any further spread,” he said. Though he was admitted to the medical college after developing virus symptoms, he tested negative.

Meanwhile, the district collector said, “The patients are accommodated in single rooms with attached washrooms. They are provided with wet wipes, tissue papers provided by the Kerala Tourism Development Corporation. They are given special continental items of their choice for breakfast, lunch and dinner and provided dry fruits as well as fresh fruits and fruit juices. They are provided non A/C rooms as the norms stipulate a room with good ventilation and sunlight. The isolation rooms are cleaned six times a day.

The patients are being given round-the-clock medical care by six teams of doctors and paramedical staff doing four-hours shifts. All the doctors are experienced and qualified with MD degrees in internal medicine. They were also being given counselling by a psychiatry team daily. And all these are done free of cost,” the collector said.

There is strong resentment here over the British media reports. “The UK couple have been promptly treated using HIV anti-retroviral drugs and they have recovered. And the news report conveniently forgot to add that the UK tourists tried to flee despite being told not to step out of their resort,” said a healthcare professional, speaking on condition of anonymity.