Patnaik will contest from Hinjli seat that he has been representing since 2000, he has also announced to contest from Bijepur seat in western Odisha. 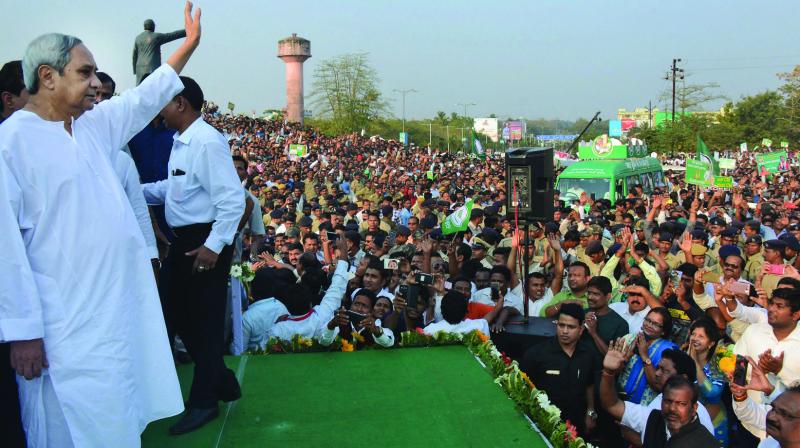 Bhubaneswar: The year 2019 is likely to be the most difficult period in Odisha chief minister and BJD president Naveen Patnaik’s political career spanning over 22 years as the Opposition BJP and Congress are pulling out all the stops to dislodge him from power in the southern state.

As increasing anti-incumbency, farm distress, rising unemployment and deteriorating law and order in the state threaten to rattle his party's prospects, the chief minister has announced to contest from two Assembly seats — one in southern Odisha and the other in western part of the state.

Both the Opposition parties have been focusing on south and western parts of the state to woo the socio-economic backward class people as well as farmers who have been alleging constant neglect by the ruling BJD.

While Mr Patnaik will contest from Hinjli seat that he has been representing since 2000, he has also announced to contest from Bijepur seat in western Odisha.

In 2017 rural polls, the BJD which has got 44 per cent votes in 2014 Assembly polls, slumped to 42 per cent, as the party suffered huge losses in western Odisha.

Although the BJD spokespersons contend that the chief minister decided to contest from Bijepur in western Odisha as mark of his commitment for the development of the region, the Opposition BJP and Congress dismiss this argument as a “lame plea” and say that Mr Patnaik decided to try his luck from Bijepur, fearing loss in his traditional Hinjli seat.

Both the BJP and Congress have accommodated more faces for the Assembly and Lok  Sabha polls, throwing a challenge to the BJD to bite the bait.

“Intelligence reports say the chief minister has lost the confidence of voters in his home Hinli constituency. That’s why he is contesting from the second seat. He, however, will not succeed in his mission and suffer heavy drubbings,” says BJP spokesperson Golak Mohapatra.

Left with no option, Mr Patnaik has replaced at least eight sitting MPs in the first phase list. In the first phase, the BJD has announced its candidates for nine Lok Sabha seats.

Knowing that the women voters, especially those belonging to the self-help group (SHG), played a crucial role in the 2014 Assembly and Lok Sabha polls, Mr Patnaik has nominated Pramila Swain, an ordinary woman to contest from Aska Lok Sabha seat. This, the BJD leadership hopes, would draw the support of 70 lakh women belonging to nearly seven lakh SHGs.

To strengthen the party’s women vote bank, Mr Patnaik has announced 33 per cent reservation for women in distribution of Lok Sabha tickets.

Apart from Pramila Bisoi, the party has fielded Sunita Biswal and Kaushalya Hikkaka from Sundargarh and Koraput, respectively.

“BJD is always committed to youths, women and farmers. We have given adequate representations to youths, women and common people in our candidates’ list announced for the Lok Sabha and Assembly polls. Besides, our welfare works for all sections of people would enable us to win polls,” claims BJD spokesperson Sulochana Das.

In the first phase, the BJD has announced the fist list of candidates for nine out of 21 Lok Sabha and 54 out of 147 Assembly seats.

The BJD has been in power in Odisha since 2000. If it wins this time, it will be its straight fifth term in power. In 2014, the BJD had won 20 of the 21 Lok Sabha seats while BJP's nominee Jual Oram emerged victorious on Sundargarh seat.