Defending the symbolic value of donning a camouflage cap

There is obvious politics and a larger agenda in national postures and conversations during such moments. 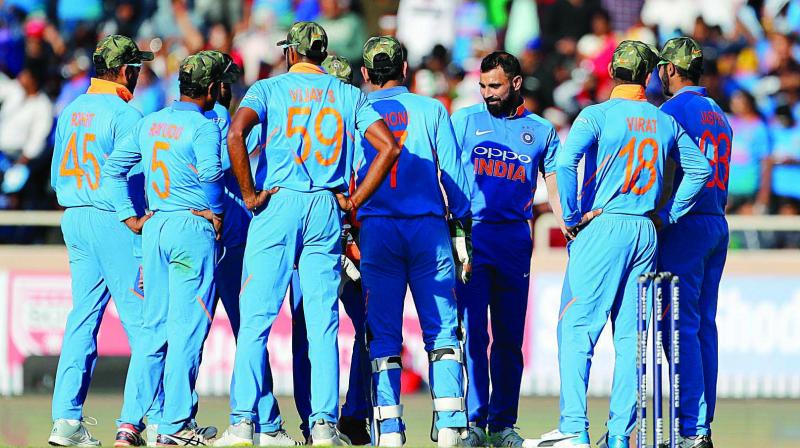 The Indian cricket team during its ODI against Australia in Ranchi on March 8 (Photo: PTI)

Mixing sports with politics is an age-old divide, and the final verdict is still out there. The iconic images of the “Black Power” salute in 1968 Olympics, where African-American athletes, Tommie Smith and John Carlos raised a black-gloved fist during the playing of the US national anthem, “The Star-Spangled Banner”, was amongst the most powerful political-expressions made in sports. Public outcry following the incident criticised and ostracised these athletes, with Time magazine punning the Olympic moto of “Faster, Higher, Stronger” with that of “Angrier, Nastier, Uglier” to contexualise their action. However, beyond individual acts of protests in sporting events, nations too partook the wholly political act of boycotts to register their own concerns; e.g. Egypt, Iraq and Lebanon withdrew from the 1956 Melbourne Summer Olympics owing to the invasion of Egypt after the Suez Canal’s nationalisation. The “Cold War” dynamics had ensured the reciprocal withdrawal by the US and the USSR led-blocs in the 1980 Olympics at Moscow and the 1984 Olympics at Los Angeles. Wherever legitimised by official sanction and belief, the act of protest or posturing is seen as putting the nation-above-all, to reinforce the primacy of national sensitivity.

Often the basic spirit of putting the nation-before-self extends onto acts recognising, remembering and celebrating the memory of “fallen soldiers” even on the sports field. The sight of the British sporting teams wearing the Red Poppy lapels to commemorate their servicemen and women killed in all conflicts or the US National Footbal League’s (NFL’s) campaign of “Salute to Service” to honour its standing military and veterans, are reflections of the same. The inherent symbolism, national pride and honour reposed in a military soldier wearing the “uniform” has a natural resonance for sports personnel who too are afforded the dignity of wearing national emblems and logos, albeit, with a starkly different responsibility, context and domain. The soldiers’ “calling” has a powerful and inspiring impulse that often leads sportsmen to seek an association with the “uniform” as their highest call to honour. The moving moment of Mahendra Singh Dhoni marching up and saluting the President of India in his sharp uniform of the Parachute Regiment (Territorial Army), to receive his Padma Bhushan, was loaded with sentiments and emotions towards the “uniform”. Unlike many other sportsmen who enjoy the pomp and show associated with honourary ranks and uniforms, Mahendra Singh Dhoni’s genuineness shone through when he tweeted, “An honour to get the Padma Bhushan and receiving it in uniform increases the excitement ten folds. Thanks to all the men and women in uniform and their families for the sacrifices they make so that all of us could enjoy our constitutional rights. Jai Hind.” Importantly, even on the sports field, Mahendra Singh Dhoni personifies the “soldiers’” code of professional dignity, and is not given to political, partisan or hyper-nationalistic hyperbole, as is the want of some others. Across the border, another rare cricketer who personified the gentleman’s spirit of the game was the former Pakistan captain Misbah-ul-Haq, who too like Dhoni had a rather calm, measured and dignified persona, as also a special affection for the military of his nation. The reticent man had famously done push-ups on the cricket field after completing his century, in an ode to the military men with whom he had attended a boot camp prior to the tour. Later, the team had followed suit, and were pulled up by their own lawmakers and administrators for doing so, owing to a patently Pakistani logic, that perceived push-ups as portraying a negative image of Pakistan and instead suggested that they do “nafl prayers or do sajda”!

Recently the Indian Cricket Team ran into an unnecessary controversy for wearing military camouflage caps as a mark of respect to the CRPF soldiers who died in Pulwama. The wounded nation was in the throes of a heartfelt sense of “hurt” and homage for its fallen soldiers, that contained and restricted the symbolism of the cricketers act to the moment of solidarity, as opposed to having a larger political agenda and import in wearing the camouflage cap. Most importantly, the due diligence of taking prior approvals from the global cricketing body, the International Cricket Council (ICC), was taken by the Indian authorities. Perhaps rankling the principal instigator of the protests, the Pakistan Cricket Board (PCB), were earlier murmurs of the Board of Control for Cricket in India (BCCI) asking the ICC to “sever ties with countries from which terrorism emanates” and talks of dropping the World Cup game against Pakistan following Pulwama. Pakistan’s instinctive and immediate counter of threatening Pakistani players with wearing black bands for supporting “Kashmir” was both puerile and a clear give-away of its national fixation and obsession towards which it can say or support anything or anyone. Unbeknownst to many, unlike Mahendra Singh Dhoni, Kapil Dev and Sachin Tendulkar, who have ceremonial ranks in the Indian Armed Forces, the current captain of the Indian team, Virat Kohli, was appointed as the brand ambassador of the Border Security Force (BSF), way back in 2013.

There is obvious politics and a larger agenda in national postures and conversations during such moments. However, the players can pay heed to their own conscience and pay personal respect to the soldiers of their respective nations, whilst, still maintaining the decorum and dignity of fairplay, as and when actually playing the “other”, as exemplified by a Mahendra Singh Dhoni or a Misbah-ul-Haq. A sportsman, like a soldier, is a very proud and complex citizen who fights for “national pride” that is dipped in values of nobility and professionalism, which also ironically ought to transcend the pettiness, bigotry and political rhetoric that consumes the political classes. He or she can adorn the symbolic representation of the national “soldier” with due concern, approval and propriety and yet confine himself or herself to its limited usage and symbolic messaging to uphold larger sportsmanship. This is the least that is expected for bearing the honour of the Ashok Chakra on the cricket helmet and on official blazers.

19 calls in eight hours from Northeast Delhi to fire service