The BJP hit out at its former ally, saying while her state was 'burning', Mamata was 'doing politics' in Delhi. 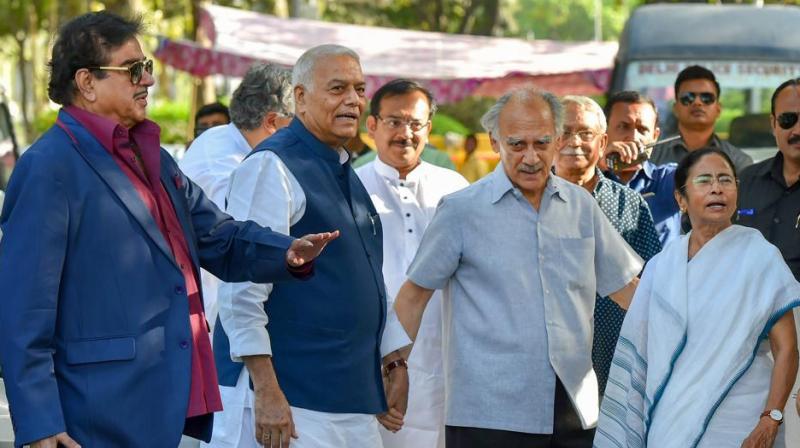 Banerjee, who heads the ruling Trinamool Congress in Bengal, was seen entering 10, Janpath at about 7pm.

Her meeting with Gandhi, who was Congress president till December last year, assumes significance as Banerjee is a key player in a possible grouping of non-BJP political parties ahead of next year’s Lok Sabha elections. Her visit to New Delhi is seen as a bid to assemble forces against the BJP in the run-up to 2019.

On Tuesday, she had met with several MPs, including those from the NCP, Shiv Sena and TRS.

After the meeting, Shourie, who has been critical of the Modi government, said the Trinamool chief’s theory of putting up a one-on-one fight against the BJP in every state was the right path to take on Prime Minister Narendra Modi.

“If the one-on-one formula is implemented, the opposition will be able to corner 69% of votes,” Shourie said.

Though Yashwant Sinha did not clarify on whether he or Shatrughan Sinha would join a united force against the BJP, he said, “Mamata is our old cabinet colleague. Her personality is known to everyone. The role she has taken to save the country is appreciable. In future also, we will support her.”

Banerjee was the railways minister in the Vajpayee government.

The BJP was quick to hit out at its former ally, saying while her state was “burning”, she was “doing politics” in the national capital. The party was referring to incidents of violence during Ram Navami processions in West Bengal.

“Bengal is burning and Mamata is doing politics in Delhi. It is like Nero fiddled while Rome was burning,” said Javadekar.

He accused Banerjee of being insensitive towards the state and said that “this attitude of the TMC supremo is insult to the people’s mandate”.

“It is also an insult to the chief minister post,” he said.

The West Bengal chief minister is free to do politics and the BJP is quite capable of replying to it, the minister said.

“But one should not do politics on the cost of the state and her constitutional duties,” he said.