The Centre has offered paramilitary forces' assistance in the light of reports of continuing violence and tension. 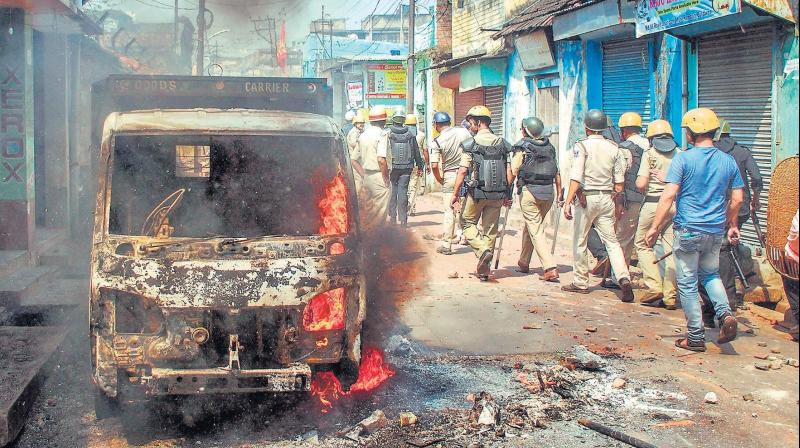 Police personnel patrol after clashes and incidents of arson over a Ram Navami procession in Raniganj, in Burdwan district of West Bengal, on Monday. (Photo: PTI)

New Delhi: The Centre has sought a report from the West Bengal government on incidents of arson and violence during Ram Navami processions in the last two days and offered assistance to deal with the situation, an official spokesperson said.

In a communication, the Ministry of Home Affairs asked the West Bengal government to send a report about the incident, the steps being taken to restore normalcy and the action taken against those involved in the violence.

The Centre also offered assistance of paramilitary forces in the light of reports of continuing violence and tension in some districts of the state, the MHA spokesperson said.

At least two persons were killed and nearly a dozen others injured, some of them seriously, in intermittent violence involving Ram Navami processions at various places in West Bengal, including Purulia, Murshidabad, Bardhman West and Raniganj.

The injured included several policemen with a senior police officer losing a hand after a bomb was hurled at him during a clash in Raniganj area.

The state government has ordered heavy deployment of police force in violence-hit areas, besides lodging several cases of arson and rioting.