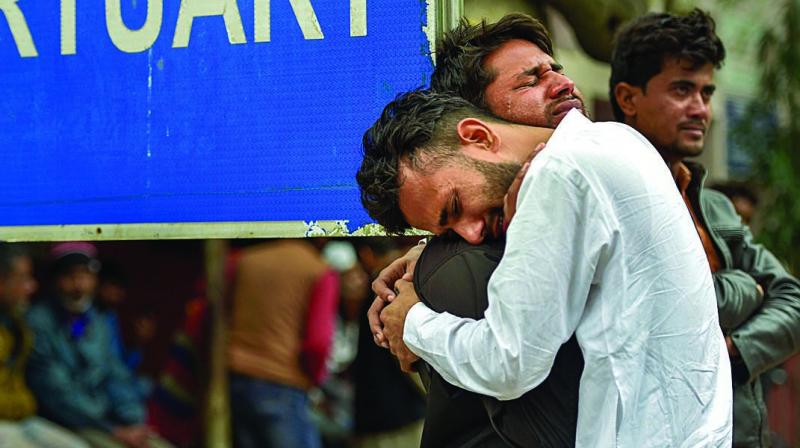 Relatives of Mohsin Ali, who died in communal violence in Northeast Delhi, cry after receiving his dead body outside the mortuary of GTB Hospital in New Delhi on Thursday. The death toll in the Delhi communal violence has reached 38. (Photo: PTI)

New Delhi: Sporadic violence continued in the riot-torn northeast Delhi on Thursday as the death toll mounted to 38. The deceased, most of whom have not yet been named by the police, include two brothers whose bodies were fished out of a drain in Gokalpuri area on Thursday.

Officials said that they were on their way from Ghaziabad to meet their family in Gokalpur on Wednesday though they had been told not to come. The family had not heard from them since.

The cause of death will be revealed after the post-mortem.

A day after the tyre market of Gokalpuri was burnt by rioters, on Wednesday too several incidents of violence were reported from Gokalpuri.

Ministry of home affairs said as no major incident has been reported in the last 36 hours in any of the affected police stations of northeast Delhi, prohibitory orders under Section 144 will be relaxed for a total of 10 hours on Friday in view of the improvement in the ground situation.

But simultaneously officials said that tomorrow being a Friday, security forces have been deployed in large numbers in and around mosques in northeast Delhi.

Now in its fourth day, the torrent of communal violence that has singed the city is the worst the national capital has seen in the last three decades.

On Thursday evening, the police filed a case against AAP councillor Tahir Hussain and other unknown people on the charges of murder and arson. They also sealed Mr Hussain’s four-storyed building.

The Aam Aadmi Party suspended Mr Hussain from the primary membership of the party till completion of probe. He has been accused of masterminding the killing of an IB officer in the Chand Bagh area.

Interestingly, before the police sealed Mr Hussain’s building, the media, particularly TV journalists, were allowed free access to the building. They were allowed to film and photograph petrol bombs and other missiles stored on Mr Hussain’s roof. It was alleged that from there Mr Hussain and his supporters were reportedly hurling stones and petrol bombs at the mob surrounding his house.

The TV channels kept playing video clips showing a man they identified as Mr Hussain on the roof along with some other men. These men appear to be involved in stone-throwing. In the videos, plumes of smoke seem to be billowing up from below his building, suggesting Mr Hussain’s house too may have been under attack.

Later in the day, the AAP leader released a video in which he claimed his innocence. “The news about me is false. Since Kapil Mishra’s hate speech, the situation in Delhi has deteriorated, with stone throwing and violence taking place. The same happened at my residence on Tuesday,” Mr Hussain said in a video posted on Twitter.

In the video, Mr Hussain claimed that a mob broke into his house and climbed to the roof. He says he “repeatedly called for the police” who arrived “some hours later” and, after the protesters were cleared, requested them to guard his home to ensure this did not happen again.

He says the police told him to leave his house, which he claims he did.

“I don’t know why the police later moved its force away as once again the mob returned to launch attacks. I am very distressed by what has happened and want you to know that I am a peaceful Indian Muslim and will always work for the country and Hindu-Muslim relations. Please believe me,” he added.

Till now, Delhi Police has filed 48 FIRs and detained or arrested 514 suspects for questioning in connection with the violence.

While incidents of sporadic violence was reported from Karawal Nagar, tension continued to prevail in the area. Due to the heavy presence of police and paramilitary forces, people have begun to trickle out of their localities to meet their daily needs, including medicines, food and water.

Since electricity had been severely disrupted in northeast Delhi as the mob burnt down houses and electric cables, workers from BSES Yamuna could be seen trying to restore connections. Debris, ranging from gutted vegetables to stones and bricks that were used as missiles by warring factions, were also being removed.

Besides GTB hospital, riot victims have been pouring into the neighbourhood Al Hind hospital in Mustafabad.

The hospital, which has been the first port of call for victims with bullet injuries, acid burns and injury marks, has been stretched beyond its capacity and limit.

Forty-five year old Sanjeeda, who runs an NGO, was in tears as she narrated her brush with “a rightwing mob.”

On Wednesday, as the situation calmed down relatively following heavy police presence, at around 8 pm Sanjeeda with her two teenaged daughters was at their house in Mahalaxmi Enclave area in Karawal Nagar when a mob barged into their house and lunged at them, even tearing their clothes.

As they began to shower blows and started assaulting them, the three women somehow managed to find an opening and began running covering themselves with dupattas. As the mob chased them, the women rushed into a lane dominated by Muslims. The mob stopped at a distance and then disappeared. As this happened, the police was nowhere to be seen. Sanjeeda and her daughters had come to the Al Hind hospital to get their wounds treated.

Another injured at Al Hind hospital said, “When I was returning from the office on my motorcycle, someone threw a pouch filled with acid at me. Initially I thought that it would be water but after couple of seconds I started feeling irritation on my back as it was burning following which I immediately rushed to the hospital.”

Over 200 people have been injured in the communal clashes that broke out in northeast Delhi after violence between anti- and pro-Citizenship (Amendment) Act groups spiralled out of control. Frenzied mobs torched houses, shops, vehicles, a petrol pump and pelted stones at local residents and police personnel. Jaffrabad, Maujpur, Babarpur, Yamuna Vihar, Bhajanpura, Chand Bagh, Shiv Vihar are among the areas affected by the riots.