This was the first duel between the IAF and PAF since the 1971 war. 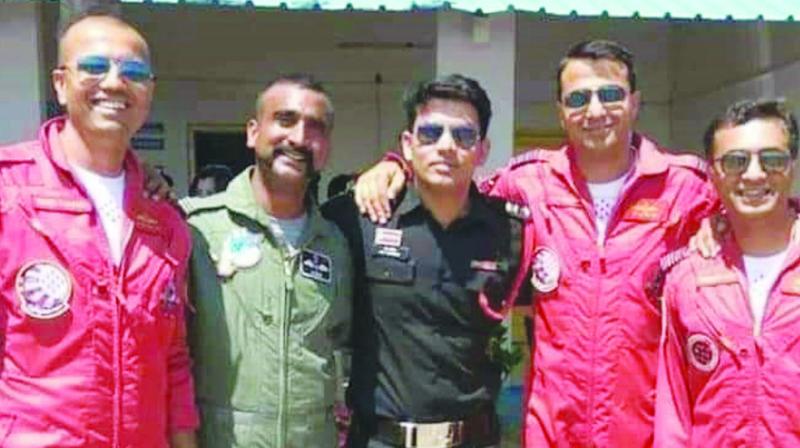 New Delhi: In a setback to India, an Indian Air Force fighter pilot, identified as Wing Commander Abhinandan Varthaman, was captured alive by the Pakistani military after a dogfight in the skies between his MiG-21 Bison fighter and a Pakistan Air Force fighter on Wednesday after the PAF violated Indian airspace. India said Pakistan had “responded this morning by using its Air Force to target military installations on the Indian side”, and that a Pakistani fighter aircraft was shot down, adding the IAF too lost a MiG-21 fighter. New Delhi also said the Pakistani attempts were foiled successfully by India’s “instant response” and alertness, a day after the IAF struck terror camps of the Jaish-e-Mohammed at Balakot in Pakistan. This was the first duel between the IAF and PAF since the 1971 war.

By Wednesday evening, the Indian government had summoned Pakistan’s acting high commissioner and issued a demarche to lodge a strong protest over the “unprovoked act of aggression”, adding that “India reserves the right to take firm and decisive action” to protect its sovereignty and territorial integrity. New Delhi also said “a dossier was handed over to Pakistan with specific details of JeM’s complicity in the Pulwama terror attack and the presence of JeM terror camps and its leadership in Pakistan”.

After disturbing footage from Pakistan went viral on the social media of the captured IAF officer being beaten up and later given a cup of tea by his
captors, India also strongly objected to “Pakistan’s vulgar display of injured personnel of the Indian Air Force in violation of all norms of international humanitarian law and the Geneva Convention”. New Delhi also told Islamabad “to ensure that no harm comes to the Indian defence personnel in its custody”, adding “India also expects his immediate and safe return”. Pakistan is likely to treat the captured IAF pilot as a prisoner of war. The capture evoked memories of another IAF officer, (then Flight Lieutenant) K. Nachiketa, who was captured by the Pakistanis during the Kargil war and later released.

Soon after the capture of the IAF pilot on Wednesday, Pakistan Prime Minister Imran Khan warned against any “miscalculation” in case of an escalation in conflict with India and offered to defuse tensions through talks. “Our action was only intended to convey that if you can come into our country, we can do the same,” he said, adding that the IAF pilot was in his country’s custody and that Pakistan simply wanted to show its capability.

On Wednesday afternoon, MEA spokesperson Raveesh Kumar said: “Pakistan has responded this morning by using its Air Force to target military installations on the Indian side. Due to our high state of readiness and alertness, Pakistan’s attempts were foiled successfully. The Pakistan Air Force was detected and the Indian Air Force responded instantly. In that aerial engagement, one Pakistan Air Force fighter aircraft was shot down by a MiG-21 Bison of the Indian Air Force. The Pakistani aircraft was seen by ground forces falling from the sky on the Pakistani side. In this engagement, we have unfortunately lost one MiG-21.”

Acknowledging that the IAF pilot was in Pakistani custody, the MEA later said: “India also strongly objected to Pakistan’s vulgar display of an injured personnel of the Indian Air Force in violation of all norms of international humanitarian law and the Geneva Convention. It was made clear that Pakistan would be well advised to ensure that no harm comes to the Indian defence personnel in its custody. India also expects his immediate and safe return.”

On the demarche issued, the MEA said: “The acting high commissioner of Pakistan was summoned this afternoon by the MEA to lodge a strong protest at the unprovoked act of aggression by Pakistan against India earlier today, including by violation of Indian airspace by the Pakistan Air Force and targeting of Indian military posts. This is in contrast to India’s non-military anti-terror pre-emptive strike at a JeM terrorist camp in Balakot on 26 February 2019. It was clearly conveyed that India reserves the right to take firm and decisive action to protect its national security, sovereignty and territorial integrity against any act of aggression or cross-border terrorism.”

The MEA added: “It is unfortunate that instead of fulfilling its international obligation and bilateral commitment to take credible action against terrorist entities and individuals operating from its soil, Pakistan has acted with aggression against India... A dossier was handed over to the Pakistan side with specific details of JeM complicity in the Pulwama terror attack and the presence of JeM terror camps and its leadership in Pakistan. It was conveyed that India expects Pakistan to take immediate and verifiable action against terrorism emanating from the territories under its control.”

Meanwhile, inviting India for talks, Pakistan PM Imran Khan said: “I ask India: with the weapons (nuclear) you have and the weapons (nuclear) we have, can we really afford a miscalculation? If this (situation) escalates, it will no longer be in my control or in (Prime Minister) Narendra Modi’s, Let’s sit together and settle this with talks.”

He said Pakistan had offered India its cooperation in the investigation after the Pulwama terror attack. “We know how the families of those killed in Pulwama incident must have felt. We have been the victims of war for decades... Since the beginning we have asked India to share actionable evidence with us. It is nowhere in the interest of Pakistan for it to be used as a base for militancy. But I had a hunch that India would escalate, and that is why I had said that if India escalates, we will retaliate.”