Even if Wg Cdr Varthaman’s MiG was hit near the LoC, due to high speed he could only eject in PoK. 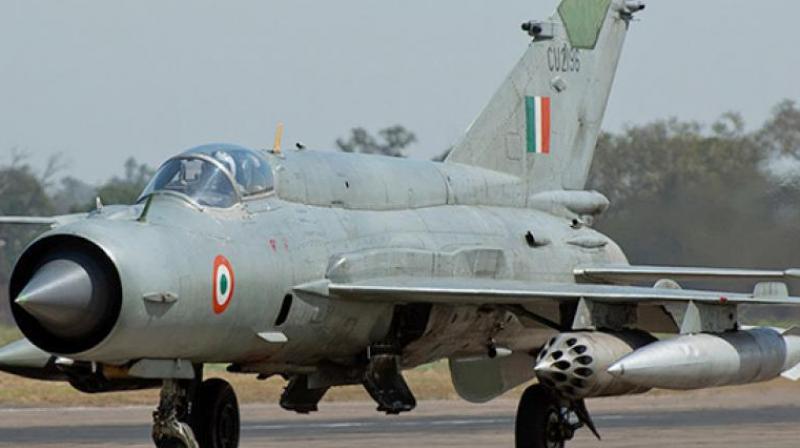 MiGs are expected to be phased out completely in about 10 years’ time. (Photo: PTI)

New Delhi: IAF’s Wing Commander Abhinandan Varthaman, flying MiG-21 Bison and on combat air patrol (CAP) on Wednesday, seems to have been drawn by the Pakistani fighter jets into an air ambush.

Three Pakistani jets briefly crossed into India airspace in Nowshera at around 10:20-10:30 am on Wednesday morning and this resulted in Indian jets scrambling to engage them. Pakistani jets, after dropping bombs at random places, began to retreat.

In the ensuring dogfight, Wg Cdr Varthaman seems to have either crossed into Pakistan’s airspace or was hit. As Pakistan had pre-planned the strike, they had activated a number of air defence guns or missiles near the border and one of them is likely to have hit his MiG-21.

“Wg Cdr Varthaman seems to have had no choice. He had to engage the intruding Pakistani jets and got drawn into a fight and their air defence. Pakistan seems to have activated a layer of air defence systems with different ranges before attack near the border,” a defence source said.

Even if Wg Cdr Varthaman’s  MiG was hit near the LoC, due to high speed he could only eject in PoK.

There has been criticism about deploying the ageing MiG 21 Bison for combat air patrol when Pakistan had threatened retaliation. MiGs are expected to be phased out completely in about 10 years’ time.

But some say that if a jet gets locked by enemy’s air defence system, it doesn’t matter if it is MiG or Sukhoi, “they can do little”.

Soon after news of the MiG going down, Wg Cdr Varthaman’s footage appeared in social media. In one of them he is being beaten by locals in violation of Geneva Convention.

In the leaked clips and picture, his face is bleeding from what appears to be a cut on his face.

In another video, he is seen calmly responding to questions by Pakistani security personnel.

In this video, Wg Cdr Varthaman tells the interrogators his name, service number, rank and religion as per Geneva Convention. “That’s what I am supposed to tell you.”

However, to a question by the interrogator, he replies: “I am not supposed to tell you that na.”

Then Wg Cdr Varthaman asks the interrogator, “Am I with the Pakistan Army?”

In third video leaked, Wg Cdr Varthaman is seen drinking tea and when asked whether he is being treated well, he says, “Yes I have”.

Asked about the place in India he belongs to, he hesitates, says he is not supposed to divulge than, but says that he is from “down South.” He refuses to reply to questions about his mission or the aircraft he was flying.

“I am sure you have found the wreckage,” is all that he tells the Pakistani Army officer who seems to be of the rank of a major.

Wg Cdr Varthaman is the son of Simhakutty Varthaman, a retired Air Marshal of the Indian Air Force.

India summoned Pakistan’s acting high commissioner Syed Haider Shah and  demanded immediate and safe return of IAF pilot Abhinandan. India also made it clear to Pakistan that no harm should be caused to the Indian defence personnel.

The ministry of external affairs said that India has strongly objected to Pakistan’s “vulgar display” of an injured personnel of the Indian Air Force in violation of all norms of international humanitarian law and the Geneva Convention.

“It was made clear that Pakistan would be well advised to ensure that no harm comes to the Indian defence personnel in its custody. India also expects his immediate and safe return,” the MEA said.