India   All India  28 Feb 2018  Congress ahead of BJP in Madhya Pradesh bypolls after seventh round
India, All India

Congress ahead of BJP in Madhya Pradesh bypolls after seventh round

Outcome of bypolls would be watched keenly as possible pointer to people's mood ahead of assembly polls in MP, later this year. 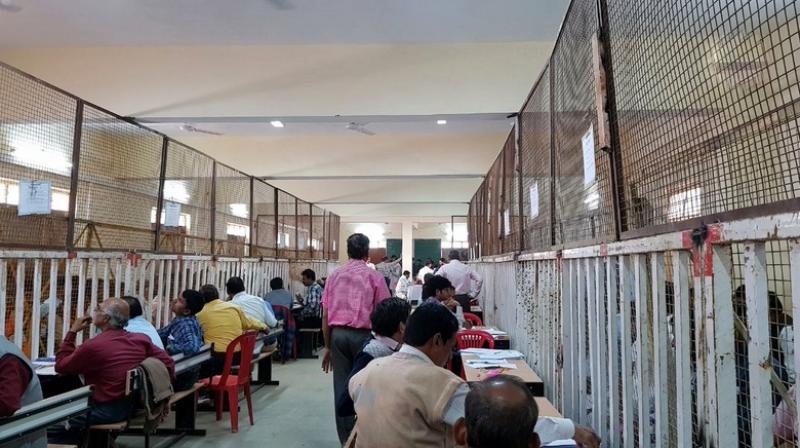 Counting of votes for bypolls to Mungaoli and Kolaras Assembly seats in Madhya Pradesh is underway. (Photo: Twitter | ANI)

Bhopal: Counting of votes for bypolls to Mungaoli and Kolaras Assembly seats in Madhya Pradesh is underway, and after the completion of seventh round of counting, the Congress is ahead of BJP in both the assembly seats.

Congress is leading by 2263 votes In Kolaras, while in Mungaoli Congress is ahead of BJP by 3,834 votes.

Both Mungaoli and Kolaras Assembly seats went to polls on Saturday. The outcome of the two bypolls would be watched keenly as a possible pointer to people's mood ahead of the assembly elections in the BJP-ruled state, due later this year.

Mungaoli and Kolaras had seen high-voltage campaigns from the ruling BJP and the Congress that is keen on retaining the two seats.

Madhya Pradesh Chief Minister Shivraj Singh Chouhan led the BJP campaign with a host of ministers, while Jyotiraditya Scindia campaigned for the Congress.

Both the seats fall under Scindia's parliamentary constituency Guna and were earlier held by the Congress.

The BJP that has been in power for 15 years in Madhya Pradesh has pitched for development in the Congress bastion. Having lost two assembly bypolls to the Congress in 2017, the BJP is keen or recovering lost ground.

In the run-up to the elections, both sides had accused each other of poll code violations and lodged complaints with the election commission.

A district collector was removed ahead of polling after the Congress alleged that there was gross government machinery by the BJP, causing massive discrepancies in electoral rolls.

Complaints of poll code violation were also filed against Chief Minister Shivraj Singh Chouhan and some of his ministers.

The bypolls were necessitated due to the death of Congress's MLAs Mahendra Singh Kalukheda (Mungaoli) and Ram Singh Yadav (Kolaras). A total of 13 candidates are in fray in Mungaoli while 22 candidates are contesting in Kolaras.