CBI arrested Karti from Chennai airport on Wednesday morning and he was produced at CBI court in Delhi in the evening. 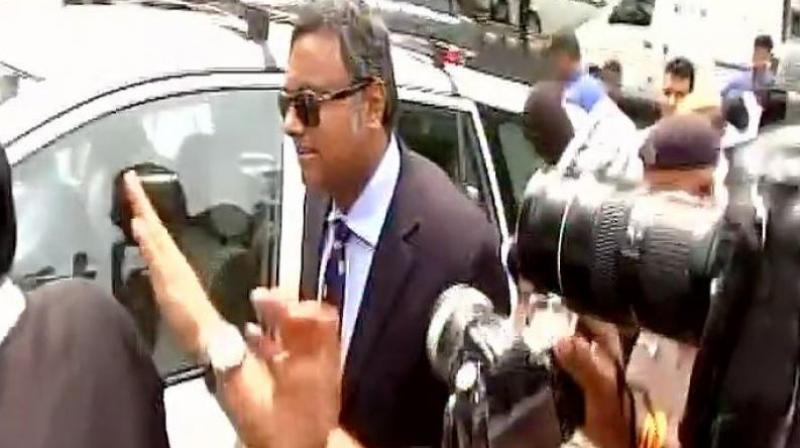 The ED had filed a case against Karti in May 2017 alleging irregularities in the grant of FIPB clearance to INX Media for receiving foreign investment of over Rs 300 crore in 2007 when his father, P Chidambaram was the union finance minister. (Photo: File/ANI)

Chennai: A Delhi Court on Wednesday sent Karti Chidambaram to one-day police custody in connection with the INX Media case.

Earlier in the day, the Central Bureau of Investigation (CBI) sought 15-day custody of Karti Chidambaram in the remand application.

Another accused in the case, Indrani Mukherjea gave a statement to the CBI that Karti asked for USD one million for Foreign Investment Promotion Board (FIPB) clearance, and on this ground, the CBI sought the custody of Karti.

After being arrested by the CBI from Chennai airport on Wednesday morning, Karti Chidambaram was produced at CBI court in Delhi in the evening.

Before being taken to the court, Karti told media that the arrest is an "absolute political vendetta". He added that he will be vindicated.

The CBI court allowed Karti's advocates to interact with him for 10 minutes inside the courtroom.

During the hearing at Patila Court in Delhi CBI said, "Karti Chidambaram is evasive in his replies and investigation. He made incorrect statements with respect to evidence. All this delays the conclusion of investigation."

CBI had summoned Karti for questioning earlier but he had sought stay orders from various courts.

He was taken into custody just after he landed from a flight from London.

Soon after the arrest, Karti was put on a Delhi-bound flight and was brought to Delhi at the CBI headquarters where the investigating agency conducted necessary formalities including a medical test before producing him to the CBI court.

The Congress slammed the arrest of Karti Chidambaram terming it as Modi government’s “diversionary tactic” to hide its "corrupt governance".

“Classical diversionary tactic to hide Scams and Colossal Corruption that is being exposed on a daily basis, be it NiMo+Choksi, DD Jewellers and Rotomac,” Congress spokesperson Randeep Singh Surjewala tweeted.

"However, it will not stop the Congress from bringing the truth out to the people,” he added.

Responding to Congress' allegation, BJP leader Sambit Patra said, "I believe no one should consider oneself above the law of country. If corrupt are being jailed and law is taking its own course, I see no reason why any political party should cry vendetta.This is law, not vendetta."

BJP's Subramanian Swamy called Karti's arrest 'a great achievement' and said, "CBI gave him (Karti Chidambaram) a lot of chances but he continued with his lies even after all evidence was presented against him. He will certainly go to jail and chargesheet will be filed by CBI. This is a great achievement."

Karti's chartered accountant S Bhaskararaman was recently arrested from a five-star hotel in Delhi on February 16 and was later sent to 14-day judicial custody.

The ED had earlier claimed that during the course of investigation, it was revealed that Bhaskararaman, a qualified CA, had been assisting Karti to manage his "ill-gotten wealth" in India and abroad.

Karti's name had cropped up in the case which relates to Foreign Investment Promotion Board (FIPB) approval granted in 2007 for receipt of funds by INX Media when his father and senior Congress leader P Chidambaram was the Union finance minister during the previous UPA regime.

The ED had alleged that INX Media had deliberately and in violation of the conditions of the approval made a downstream investment of 26 per cent in the capital of INX News Pvt Ltd without specific approval of FIPB, which included indirect foreign investment by some foreign investors, and generated Rs 305 crore foreign direct investment in INX Media Pvt Ltd against the approved foreign inflow of Rs 4.62 crore.

To wriggle out of the situation without any punitive action, INX Media entered into a criminal conspiracy with Karti, the ED has alleged. The FIPB unit of the finance ministry had not only granted illegal approval but also misinformed the investigation wing of Income Tax Department, it had alleged.